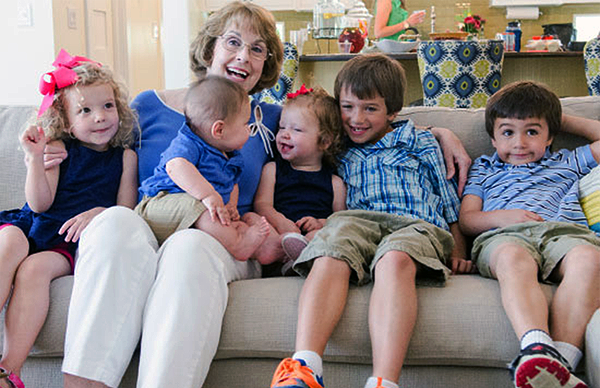 In the five years since Ellen Smith was diagnosed with Stage IV lung cancer, she has been busy. 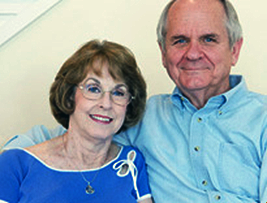 She traveled the world, indulging her love of art and art history. She celebrated the births of four more grandchildren, expanding her large family even more. She married Ben Smith, the man she calls her “best friend.”

None of this seemed possible in June 2009 when she learned that the lung cancer, which had been initially diagnosed in 2008, had spread to her abdomen and brain.

“You hear ‘Stage IV’ and you say ‘How many months or days do I have left?’” Smith said.

“But between the Anschutz Medical Campus and the good Lord, I am still here.”

Smith called in late to work on April 1, 2008—April Fools’ Day. She had a nagging cough, and her primary care physician, who suspected she might have pneumonia, sent her to the hospital for tests.

Smith did have pneumonia. She also had a mass in her left lung. Five biopsies later, she learned that she had non-small cell lung cancer. She was 58 years old, with no other health problems, and she had never been a smoker.

“After you hear the ‘C’ word, you just think that’s synonymous with death,” Smith said. “But I still felt like I had a lot to live for and a lot to do.”

Smith underwent chemotherapy to shrink the tumor, and in August 2008, surgeons removed her entire left lung. Five months later, when the cancer returned under her sternum, doctors treated her with radiation. But despite this aggressive treatment, the cancer advanced to Stage IV.

Smith’s three adult children had been researching lung cancer, and their investigation led them to the website for the CU Cancer Center at the Anschutz Medical Campus, where they found a number they could call for a second opinion. The good news? D. Ross Camidge, M.D., PhD, was doing a clinical trial for the treatment of non-small cell lung cancer. The bad news? There was only a 4 percent chance Smith’s cancer would have the specific molecular markers that would qualify for the trial.

She was in Scotland on what she thought might be a final vacation when her son called her with the news. She was a match for the clinical trial. “I went from terror to ‘Oh my gosh, there is hope,’” Smith said.

Smith started the clinical trial at the end of July 2009. She was one of the first people in the world to take crizotinib, an ALK inhibitor which is designed to block the gene that drives the lung cancer. Two months later, Smith sat with two of her children, Camidge, and Ben Smith, whom she had been dating since the summer of 2005, and stared at PET scans of her entire body.

“The cancer had disappeared off the scans,” Camidge said. “I was delighted.”

“Dr. Camidge said to me, ‘We cannot cure your cancer, but we can control it,’” Smith said. “I understood that this would be the new norm—living with cancer.”

A year later, Ben came over to her house with a serious look on his face.  Ellen Smith suspected that their relationship was about to end, a casualty of cancer. Instead, he proposed with words that could easily double as vows. “I will be here with you and for you,” he said. “You’re not going to journey through this alone.”

Through the years, Ellen Smith’s cancer has gone through phases, sometimes outwitting the drugs. During those periods, she has had traditional infusion chemotherapy and radiation and then returned to an ALK inhibitor. When that drug stopped working, she began another clinical trial with a second-generation ALK inhibitor.

“Lung cancer has been treated as one disease for decades,” Camidge said. “We know now there are different types of lung cancer, so you can’t apply the dogma of the last 20 years. You need to be a clinical pioneer, looking over the next mountain, exploring. You’re on a journey with the patient, their family and the drug company, and no one knows the outcome. You’re trying to figure it out together.”

Smith praises Camidge for his willingness to “think outside the box and be open to all sorts of options” with her treatment.

“Dr. Camidge is brilliant,” she said. “He is also compassionate. I think of him as my brother.”

Today, Ellen Smith has two missions: to enjoy every minute with her family (“I am a grandma who is gaga for her grandchildren”) and to spread the word about the CU Cancer Center on the Anschutz Medical Campus.

“Anschutz (Medical Campus) is the place to go,” Smith said. “They know that when dealing with cancer, one size doesn’t fit all. It’s very personalized care, individualized to the type of cancer. It’s a whole new way of thinking.”

“Ellen has helped other people,” said Camidge. “The data we have published about her case has changed the world multiple times.”

Send your thoughts and suggestions for the Newsletter.
END_OF_DOCUMENT_TOKEN_TO_BE_REPLACED