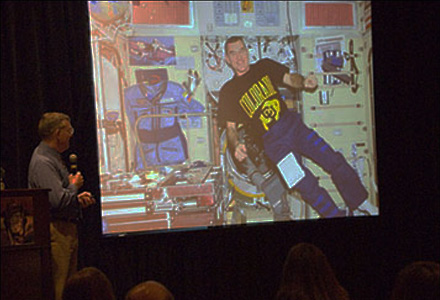 Jim Voss speaks while showing a photo from his
astronaut days. (Photo by David Sprouse)

In space, where friends are few and far between, the astronaut reached out to shake a man's hand.

"Bad leadership can have a severe effect on morale," said Jim Voss, scholar in residence in the aerospace engineering sciences department at the University of Colorado at Boulder. "On the International Space Station, I learned about leadership through a bad example."

Voss, who earned a master's degree in aerospace engineering and an honorary doctorate from CU-Boulder, spoke at the Excellence in Leadership luncheon and lecture Friday, Nov. 13, at Denver's Brown Palace Hotel. The event also featured the presentation of the 2009 Excellence in Leadership Award to Barbara A. Gaddis, Ph.D., of the University of Colorado at Colorado Springs (see related story).

The astronaut's recollection took the audience far from campus, to a 2001 space station mission notable for the participation of the first "space tourist," U.S. businessman Dennis Tito, who paid millions of dollars to join American and Russian astronauts. NASA officials had initially balked at the idea of a civilian on the mission, but Tito was a customer of the Russians, who overruled U.S. management.

"It became a real confrontation between senior managers," Voss said. "It was an international incident about to happen."

As the civilian's arrival on the station neared, Voss and fellow astronauts Susan Helms and Yuri Usachev were told by U.S. officials not to show Tito "signs of friendship."

"I got chastised for shaking hands with him when he came on board," Voss said. "There was a cloud hanging over us.

"We (astronauts) talked about this among ourselves and decided after three days that we were going to take action. We were going to do what we should do, which is act as human beings, and not listen to our leaders."

Voss said he's seen plenty of good leadership — as well as some bad — throughout his career at NASA and previously in the U.S. Army, where he spent 27 years as an officer.

"Leaders should be motivated and competent," Voss said, adding a list of other qualities — loyalty, duty, honor, ethos — that he began appreciating as a young lieutenant in the Army.

Voss said he hopes to inspire a new generation of space explorers at his alma mater, where he began his new role this fall. After speaking and showing slides from his 202 days spent in space, he answered audience questions such as, "What was it like being up there?"

"I felt like Superman when I was in space," Voss said. "I could lift heavy objects. I could fly. I slept better than I had in years because there are no pressure points on your body.

"You don't have to be young (to travel in space). I always thought space would be a great place to go as a spa or retirement community."

The Excellence in Leadership Program (formerly Emerging Leaders Program) began in 2000. It aims to develop effective leaders throughout the university. More than 250 participants from all campuses and system administration have completed the program.