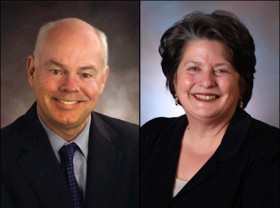 The University of Colorado has named two faculty members winners of the 2011 Thomas Jefferson Award, one of the highest honors given at the institution. The award recognizes faculty, staff and students who advance the ideals of the third U.S. president and a Founding Father whose legacy extends to the arts, sciences, education and public affairs.

This year's honorees are:

David Braddock, Ph.D., executive director of CU's Coleman Institute for Cognitive Disabilities and psychiatry professor at the University of Colorado School of Medicine, whose work and service help people with disabilities.

Terry Schwartz, Ph.D., an associate dean and professor, whose commitment to public affairs led to the expansion of a school at the University of Colorado Colorado Springs.

To be considered for the award, nominees must demonstrate: a broad interest in literature, arts and sciences and public affairs; a strong concern for the advancement of higher education; a deeply seated sense of individual civic responsibility; and a profound commitment to the welfare and rights of the individual. Honorees must combine excellence in the performance of regular academic or work responsibilities with outstanding service to the broader community.

"The Thomas Jefferson Award winners are great ambassadors for our university. Their excellence in academics extends into communities throughout our state, where they partner with public and private entities to improve quality of life," said CU President Bruce D. Benson. "We have many high-quality people providing great service to Colorado, and these deserving honorees are great examples of that."

Braddock holds the Coleman-Turner Endowed Chair in Cognitive Disability as professor of psychiatry at the University of Colorado School of Medicine on the Anschutz Medical Campus in Aurora. He has been executive director of the Coleman Institute since 2001, when the institute was established by a gift from founding donors Bill and Claudia Coleman. The institute's mission is to catalyze and integrate advances in science, engineering and technology to improve the quality of life and independent living for people with cognitive disabilities.

"David is a freedom fighter, much like Jefferson was, in establishing the rights of people with cognitive disabilities," wrote Enid M. Ablowitz, associate director of the Coleman Institute, in her nominating letter. "For over 40 years, David has contributed to cognitive disability research in public health and social policy."

For decades, Braddock's reports on "The State of the States in Developmental Disabilities" have been used by every state in the nation, forming the basis for understanding public financing of services to people with developmental disabilities and their families. He hosts the nationally acclaimed Coleman Institute's Annual Conferences on Cognitive Disabilities and Technology, and also serves on the executive committee of the International Special Olympics.

As associate dean at UCCS, Schwartz leads the institution's School of Public Affairs. Strictly a graduate school in the past, its mission expanded once Schwartz accomplished the development and approval of an undergraduate program in criminal justice.

"Throughout this process, Professor Schwartz has continued her zeal and commitment to teaching," wrote James A. Null, Ph.D., professor and chair of the UCCS political science department. "She offers classes and serves as both professor and adviser to her students."

Schwartz also sponsors an annual leadership training event for the public sector, attracting up to 150 enrollees from the Colorado Springs area, and is active in the arts community. "Even with all of these activities she still finds time to be a scholar and publishes her writing," wrote Null, noting Schwartz's works on science, health in the public sector, public policy and public opinion.

A committee composed of CU faculty, staff and students from all four campuses selects award winners. Recipients receive an engraved plaque and a $2,000 honorarium, and are recognized formally by the CU Board of Regents. The regents and President Benson are expected to recognize this year's award recipients at the Feb. 22-23 board meeting.

The Thomas Jefferson Award was established at the University of Virginia in 1951 by the Robert Earll McConnell Foundation to honor teaching faculty who exemplified the humanistic ideals associated with Jefferson. By 1962, six other institutions had established a Jefferson Award, including CU. In 1980, the university added a student category; in 1988, the staff category was approved. Funding for the awards is derived from earnings on an endowment provided by the McConnell Foundation and from a bequest by Harrison Blair, a CU alumnus.