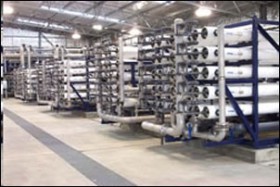 A license agreement with Reverse Osmosis Technologies (ROTEC) for University of Colorado technology will enable more efficient treatment of groundwater, making it suitable for drinking. ROTEC, an Israel-based water treatment technology company, will use the technology, licensed through the Technology Transfer Office(TTO), to improve the performance of its water desalination process.

The efficient recovery of fresh water from ocean water or waste water is important in arid regions, in highly industrialized regions and in locations close to ocean water but remote from fresh water sources. ROTEC is developing an innovative technology for increasing the amount of brackish (partially saline) groundwater that can be reclaimed by reverse osmosis, using a reverse flow methodology developed by scientists at Israel's Ben-Gurion University of the Negev.

In reverse osmosis systems, precipitation of salts found in saline and hard water causes scaling, which is one of the main factors limiting the recovery of potable water. The licensed technology, developed by Alan Greenberg of the CU department of mechanical engineering, is a patented ultrasonic sensor that can detect when scaling begins. The sensor triggers a change in the system flow patterns so that scaling is prevented.

"We are glad to see this technology applied to one of the world's most important problems," said Kate Tallman, director of technology transfer for CU-Boulder.

Ben-Gurion University and ROTEC have begun operations at a pilot facility on the Sde Boker campus of BGU, and plan to operate the pilot at a Mekorot desalination plant in Eilat and at an additional test site in Jordan in 2010 or 2011.

"This is a great opportunity for ROTEC to incorporate and test its high recovery desalination technology in industrial scale RO systems", said Dr. Noam Perlmuter, chief executive officer of ROTEC. BGU and CU-Boulder recently were awarded grants from the NATO Science for Peace program and the Middle East Desalination Research Center (MEDRC) to facilitate development of these projects.