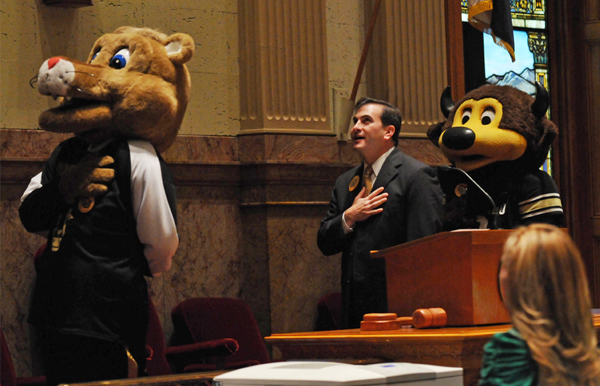 Sen. Brandon Shaffer, president of the Colorado Senate, gets help leading the Pledge of Allegiance at CU Advocacy Day. (Photo: Casey A. Cass/University of Colorado)

More than 200 attendees filled the Capitol hallways with enthusiasm and campus colors at today’s CU Advocacy Day, an annual event that brings friends and members of the CU community together with state leadership under the gold dome.

University leadership from throughout the system was represented, along with faculty, staff, alumni, donors, CU Advocates and students, including the University of Colorado Denver’s 9th Street Singers, who provided a vocal soundtrack to the government engagement.

Colorado leadership at the event, presented by the Office of Government Relations and the CU Advocates, included Lt. Gov. Joe Garcia, who acknowledged University of Colorado Colorado Springs Chancellor Pam Shockley-Zalabak as one of his mentors. In a brief speech, he stressed the need for state investment in all the state’s higher education institutions, including CU.

“CU is our flagship and we’re very proud of it and its multiple campuses,” Garcia said to an audience gathered in the Old Supreme Court Chambers.

He acknowledged the challenging financial climate and related diminishment of state funding for CU and other institutions – at a time when student needs are increasing.

Even CU mascots Chip (CU-Boulder) and Clyde (UCCS) managed to join in the mingling.

“I never come down here (to the Capitol) to whine and cry about money,” President Benson said earlier in the day. “We have to be entrepreneurial.”

Kelly Fox, vice president for budget and finance, noted how the university has shown such entrepreneurial spirit, achieving $12 million to $13 million in efficiency savings in business processes. She also pointed out that, when adjusted for inflation, the current level of state support for the university is at its lowest level in history.

Fox was followed by Henry Sobanet, director of the Governor’s Office of State Planning and Budget, who couldn’t offer a sneak preview of Monday’s expected revenue forecast (“I haven’t told the governor yet”), but did stress his ties as a CU alumnus and the need for members of the CU community to be engaged with CU and to continue sharing the university’s story.

“What really needs to be stressed is the university’s connection to economic development and employment in the community,” Sobanet said. He said that the recently launched TBD Colorado effort will include town meetings where residents can speak out in favor of support for higher education.

“It’s important to let your friends and family know how higher education is not only a public treasure, but a public necessity,” he said.

Shannon Fender, a CU Denver senior in political science and member of CU Advocates, seemed ready to do just such outreach.

“It’s important for students to make people aware of how much CU means to the state, the country and the world,” she said after the event. “We need to make our voices heard. We want to make big changes for higher education, but we need the support of legislators. It was important to be here at CU Advocacy Day right before budget setting.”