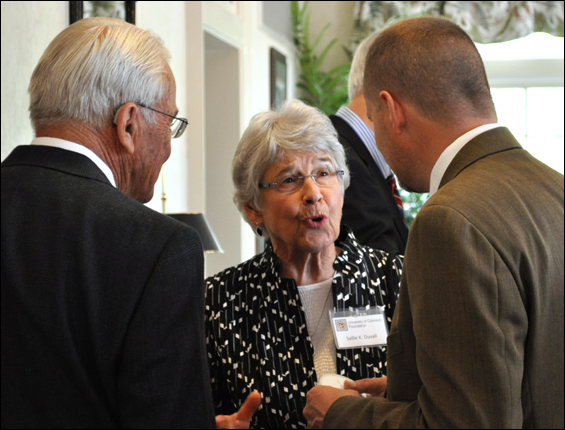 Sallie Duvall enjoys a chat during the CU Foundation's annual luncheon for the Heritage Society, held last month at the Denver Country Club.

More than 90 people gathered at the Denver Country Club on May 26 for the University of Colorado Foundation's annual luncheon for the Heritage Society, which honors those who have made estate commitments to CU to be realized through their wills.

Attendees included numerous former faculty and staff, as well as alumni and friends of each of CU's four campuses. Lunch guests connected over chicken with capers, saw a video introducing the Creating Futures campaign, and heard remarks from CU Foundation President and CEO Wayne Hutchens and CU President Bruce Benson.

Concurrent with the Creating Futures campaign, the CU Foundation has initiated CU in the Future – an initiative to document $240 million in planned giving commitments. Planned giving vehicles include trusts, bequests, gift annuities and IRA beneficiary designations, enabling many donors to make a greater impact than they thought possible because of tax advantages or the gift's deferred status.

Presently, the foundation has recorded $140 million in anticipated estate gift provisions, up from $50 million since 2003. Heritage Society members have expressed their intentions to leave an estate gift to CU. Doing so helps CU anticipate future revenue streams, and enables the university to honor donors for their commitment during their lifetimes.

"The foundation and the university each recognize the importance of a strong pipeline of planned gifts," says Kristen Dugdale, vice president of planned giving for the CU Foundation. "CU is an institution that will be around for hundreds of years to come. These gifts are an important catalyst for CU's continued excellence."

In remarks that touched upon recent CU highlights, Benson – who with his wife Marcy is chairing the Creating Futures campaign – thanked the attendees for their lifetime of commitment to CU.

"People look up to the people sitting in this room," Benson said. "If they see you making a contribution, they're going to do the same thing."

For more information about planned giving to CU, contact 303-541-1335 or visit cufund.giftlegacy.com