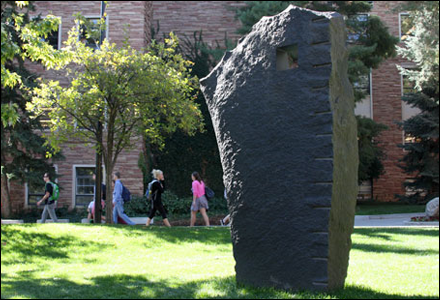 Friends of Jerry Wingren bought his “Standing Stone #2,” made of Swedish black granite, and donated it to the University of Colorado. Photo by Noah Larsen

Friends of Jerry Wingren bought his “Standing Stone #2,” made of Swedish black granite, and donated it to the University of Colorado. Photo by Noah Larsen

The Fourmile Fire of 2010 destroyed more homes than any wildfire to that point in Colorado history, and Jerry Wingren’s artistic studio was one of the casualties. A lifetime of sculptures, his library and many tools disappeared in a plume of smoke that could be seen from space.

Wingren’s friends strategized about how to help him. But the former faculty member at the University of Colorado did not want charity. He wanted to sell art.

Brenda Niemand, Wingren’s friend and a board member of the CU Art Museum, hatched a plan with her husband: buying one of Wingren’s pieces of art and then donating it to CU-Boulder.

With help from his friends and CU-Boulder’s Wingren’s “Standing Stone #2, 2002,” was purchased and donated to the university, which formally dedicated the sculpture on Oct. 4.

“This sculpture represents the growing importance of the arts at CU-Boulder,” said campus Chancellor Philip P. DiStefano. He noted that the campus is a hub for the visual arts and said more than 385,000 people annually come to the campus to take advantage of cultural and fine-arts events.

Lisa Tamiris Becker, director of the CU Art Museum, thanked the donors for the gift, which she said “creates a sense of place” and combines traditions of Japanese and Scandinavian artists. Tamiris Becker noted that when CNN was filming a segment recently, it chose Hawthorn Court, which is where the sculpture sits.

Wingren himself approached the lectern with a self-deprecating remark about his public-speaking abilities, invited observes to imagine a little kid in small-town Alaska telling others, “I’m going to be an artist.” The response was laughter, he said.

Wingren, who taught art for six years at CU-Boulder, has lived and worked in the mountains west of Boulder since the 1970s. He won a Fulbright Scholarship in 1974 to study German drama at the University of Bremen in Germany. While there, he became enthralled with sculpture and served an apprenticeship under the renowned sculptor and stoneworker Otto Almstadt.

His career trajectory began changing while walking to the classroom through a sculpture-filled park in Germany. “I fall in love with the stuff,” Wingren said.

Stone, one of his media, can be really heavy, Wingren said. “I try to lighten it up.”

Within three months this year, Niemand and fellow board members Alan Rudy and Mark Addison spearheaded a successful effort to raise $95,000, enough to purchase the sculpture and ship it to Boulder from the Nordic Heritage Museum in Seattle, where it was on loan.

“Many people know him and wanted to help,” Niemand said. “Everybody is very happy that it was completed.”

“He said the one thing that was the most painful was to lose his own collected art,” said Niemand, who met Wingren some years ago on an Open Studios tour. With the sale of his sculpture and his studio in the process of being rebuilt, “He’s feeling quite cheerful.”

One reviewer commented that Wingren’s sculpture “strives for a lightness and movement through space with materials whose characteristics would seem to deny both.”

Hawthorn Court is west of Ketchum Arts and Sciences, south of Norlin Library, east of the Cooperative Institute for Research in Environmental Sciences, and north of Cristol Chemistry and Biochemistry.

For more information about Jerry Wingren and his art, see http://www.wingrensculpture.com