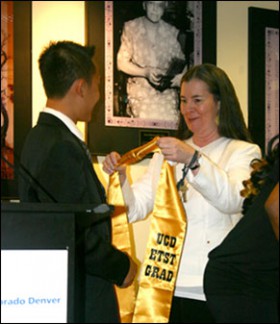 The ethnic studies minor is the third largest in terms of minors on the UC Denver campus.

The May 14 event at the Multicultural Lounge in the Tivoli honored 20 graduates who completed majors from every college on campus, including a large group of premedical students.

The event was attended by a group of approximately 100 students and family members. Ethnic studies founder Cecil Glenn was in attendance. Sgt. Steve Eslary and his family also attended; they recently endowed a scholarship for ethnic studies students.

"Our ethnic studies students gain cultural competency skills that give them an edge in very competitive job markets," Langston said. "The majority of our graduates will seek employment opportunities in fields that serve very diverse communities."

Some of the individual students included: