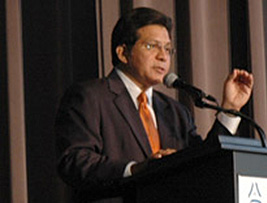 Just two days before the 10th anniversary of 9/11, former U.S. Attorney General was on the Auraria Campus to speak to a crowd gathered in the Tivoli Turnhalle about his experiences serving in President George W. Bush’s administration.

Gonzales, who was heavily involved in America’s War on Terror, outlined the changing of the American presidency since the attacks. He called Osama Bin Laden’s assassination “the completion of a mission started 10 years earlier.”

Gonzales said Bush took “extraordinary steps on protecting our liberty.” Such steps, he added, “were part of an important transformation in the goals of the government. The government went through a fundamental shift from a prosecution mindset to a prevention mindset.”

Some members of the audience carried signs, donned black hoods and expressed disagreement with Gonzales and Bush administration actions that were followed by human-rights questions and allegations of torture.

Gonzales emphasized that President Bush did not give any orders to torture anyone. He explained his interpretation of international and domestic law and why he determined that they did not restrict the use of waterboarding.

Gonzales acknowledged that decisions made during his time in office were very controversial, but he believed they were beneficial.

“Were they effective in protecting Americans? Absolutely,” he said. “We are safer, but we are not yet safe.”

Americans must keep the War on Terror an issue of great importance, Gonzales said. The criticism does not move him from his beliefs.

“You cannot serve in these positions if you’re afraid of criticism,” he said. “You cannot be paralyzed by criticism.”

Send your thoughts and suggestions for the Newsletter.
END_OF_DOCUMENT_TOKEN_TO_BE_REPLACED