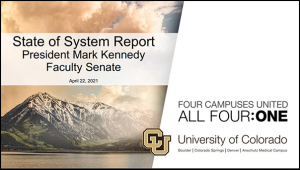 CU President Mark Kennedy last week appeared before the Faculty Senate, delivering State of the CU System remarks on his efforts to secure funding for CU, plans for addressing pay equity among faculty and staff, and progress and challenges remaining in diversity, equity and inclusion (DEI).

During the April 22 meeting, led by Faculty Council and held virtually, President Kennedy’s presentation also detailed his work engaging with Colorado lawmakers at the state and federal levels to advocate for funding for CU and higher education institutions across the state.

Kennedy thanked faculty for going above and beyond expectations throughout the course of the pandemic, and acknowledged the extra effort required at such a time. In collaboration with the university’s shared governance groups, the president sought vaccination preference for student-facing faculty and staff, 30 days’ notice for return to in-office work, and improvements to the popular tuition benefit, which are being announced this week ahead of a July 1 rollout.

Diversity, Inclusion, Equity and Access is one of the four pillars of the systemwide Strategic Plan, the development of which Kennedy provided updates. Two specific groups to be tracked initially for progress are under-represented minorities and veterans. The university will be monitoring the percentages of new faculty and staff hires, as well as students, in those populations.

A Belonging Survey of the CU community is being developed, with a campus-based rollout planned for the fall. During her update later in the meeting, Theodosia Cook, Chief Diversity Officer of the CU system, said she is meeting biweekly with campus leaders regarding the survey. “We are still in editing mode,” she said.

Regarding affordability and student access, one of the Strategic Plan’s four pillars, “We have an equity gap at CU,” Kennedy said. “We want to close that.”

Next month will see the review of recommended goals and action steps by the Strategic Plan’s steering committee, followed by consultation with the regents, who will be presented with the final plan at their July retreat.

Kennedy noted recent key hires in DEI leadership at the system and campus levels, and highlighted the expanded diversity of his cabinet.

“Of the eight individuals I have been involved in hiring, five are women, five are people of color, four are under-represented minorities – and all were the most qualified candidates,” said Kennedy, who also detailed numerous DEI-related actions and supportive funding that he directed.

“As it relates to DEI, we’ve done a lot and we have a lot to do,” Kennedy said. “I look forward to working with you all to achieve that end.”

Faculty Council has long advocated for examination of pay equity across the system. Kennedy directed President’s Initiative Funds to be used for a pay equity analysis, initial results of which he shared at the meeting. The number of faculty and staff determined to be lower-limit outliers for compensation were six at system, 10 at UCCS, 92 at CU Boulder and 206 at CU Denver l CU Anschutz. As percentages of total faculty and staff, those figures range from .87% to 1.6%.

Communications on the study are set to begin in May. Besides reporting findings, they will detail how inequities are being addressed and steps faculty and staff may take to initiate complaints.

In other business at last week’s meeting: