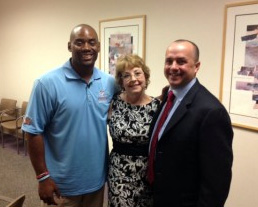 His goal is changing the face of lung cancer. Former NFL linebacker Chris Draft is logging thousands of miles to reach that goal. Draft is traveling to cancer centers across the country to learn everything he can about the disease that took the love of his life. Despite his loss, Draft’s message is about people living and fighting lung cancer. People like his wife.

What he found at CU Cancer Center is lung cancer survivors and hope. He met Ellen Smith, who got another chance at life by participating in a clinical trial for people with anaplastic lymphoma kinase (ALK) positive non-small cell lung cancer. Smith told Draft about her life since her diagnosis. She has traveled, gained precious time with her family, become a grandmother again and even gotten married. Draft encourages lung cancer survivors like Smith to tell their stories.

“Lung cancer doesn’t have a face and if it does, it’s a cigarette,” Draft said. “But things are changing. People need to see people with lung cancer living.”

Draft wants to change the face of lung cancer. He wants people to know it is the No. 1 cancer killer in the United States. He wants to spread the word that lung cancer kills more people than breast, prostate, colon, liver, kidney and skin cancer combined.

Draft’s stop at CU Cancer Center was the 40th in his tour of cancer centers across the country. He wants to share Keasha’s story of living for each day to inspire others so “they can be energized regardless how long they have. They are living.”

Send your thoughts and suggestions for the Newsletter.
END_OF_DOCUMENT_TOKEN_TO_BE_REPLACED