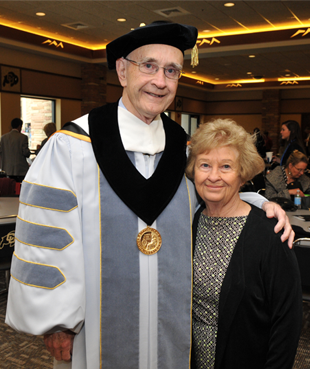 Regent Tilman “Tillie” Bishop at last spring’s CU-Boulder commencement with his wife, Pat. The couple have been married 59 years. (Photo by Casey A. Cass/University of Colorado)

Tilman “Tillie” Bishop is looking through the rear-view mirror at 38 years of being an elected public servant.

His journey in state politics began with a poker game, led to decades of leadership under the gold dome and concludes with his current term as a University of Colorado regent.

In 2006, voters elected the Grand Junction Republican to represent the 3rd Congressional District on the board. Though he could have run for re-election this November, he announced last week that he’ll step down when his term ends a year from now, because a two-year battle with cancer has made it difficult for him to travel across the state for board meetings.

“It was an agonizing decision for me,” he says. “In fairness to my colleagues, the president, the administration, students and myself, it’s in my best interest at this time, knowing the uncertainty of my health.”

His time on the board is just one of many contributions to education in Colorado: He taught in public schools for seven years and served as an administrator at Mesa State College for 31 years. He also advocated for education during his years in the General Assembly, serving in the House for four years beginning in 1971, and in the Senate from 1975 to 1999.

Does he look forward to taking it easy?

“I’ve never taken it easy,” he says with a laugh. “I have great respect for nonprofit organizations. I will be trying to spend a little more time trying to identify nonprofits here in the northwest region that are needing financial help, and I will still remain active in my community.”

1. Before serving on the Board of Regents, you served 28 years in the Colorado General Assembly. What first inspired you to run for office?

You’re not going to believe this. We had a group of guys, pretty prominent people in the community, who played poker once a month. We had a vacant House seat in our district, and we went around the table – everybody had a reason why they couldn’t run for election or didn’t want to run. Mine was the weakest.

I remember campaigning in Palisade, knocking on doors, and a lady chewed me out for walking on her lawn. So I stayed on the sidewalks. Then the lady’s little poodle ran out when I opened the gate. She’s yelling and sobbing while I’m chasing that little dog all over, close to downtown. I finally caught him and took him back to her house. She said, “You’re running for something?” I said, “Yes, I’m running for the Colorado House of Representatives.” She said, “You really ought to run for dog catcher.”

I was completing a four-year term as a Mesa County Commissioner when the regent seat came open for the 3rd Congressional District. I asked my wife if that was something she thought would be a good place for me to serve. We decided to run. Although my wife didn’t know it was a six-year term, not a four-year term.

At the end of my six years as a regent, I will have a total of 38 years as an elected public servant.

2. Of the work you’ve done as a regent, what stands out in your mind as the most significant?

When I came on board as a regent, we were coming out of some problems with athletics. At the same time, there was a search for a new president -- hiring Hank Brown was one of the highlights. He was able to come in and stabilize and get the university back on track to being the great university that it is.

Following Hank Brown's resignation came the selection of Bruce Benson as president. He has more than proven himself with the faculty, administration, students and stakeholders. He and his wife, Marcy, working together as a team have a great love for the university system, all four campuses. Through his leadership the CU Foundation has had its best fundraising years ever, which is what the university needs to retain its world-class status. When we look at what’s happening in the reduction of state funding, we have undergone some very difficult decisions as to where cuts could be made, and President Benson has been a real leader in that area, with his administration, in identifying where reductions had to take place.

We have a good team, overall, running the University of Colorado system. We want to remain not just competitive, but on the very top. In order for that to happen, you’ve got to have leadership, and that also needs to come from the regents. We have to know when not to get bogged down in micromanagement or criticizing really minor matters.

3. Since your first election to office in 1970, what changes have you seen to state politics? Are things better or worse?

Worse. The people of Colorado did themselves a great disservice by passing term limits. It limited the institutional memory of elected officials.

I carried a few unneeded bills myself. But on almost every bill’s second or third reading, I would ask myself, “Is this really good public policy?” If I could say yes without having to struggle, then I would vote for it. If not, I wouldn’t. I don’t think you see much of that happening today.

Budget problems today for the university and state are very difficult. Higher education has been the one area that has been hurt the most. And at the university, in order to be competitive, whether we like it or not, we’ve got to change with times, update equipment and technology so that we’re competitive with peers across the country and globally.

You’ve got to continually look for efficiency, good management and cost savings. We have been able to do that. How much more we can do without impacting the quality of the university is a question that future regents are going to have to address.

4. As a Colorado native and someone who earned degrees and worked in education here, what do you think it would take to change the Colorado paradox, how the state ranks high in the number of adults who have post-secondary degrees, but low as far as high school students who go on to graduate from college?

That is such a good question. I’ve struggled with that. Young people today don’t really have the opportunity to be young. It’s such a fast-moving society and world. There are a lot of single moms and dads, so you don’t have the cohesiveness of family. If you don’t have a good family life at home, it’s going to be difficult for students at school. A lot of students are holding down part-time jobs to help pay expenses for Mom at home, just to maintain a place to live and food on the table and the clothing on their backs.

We could increase the number of high school students who go on to graduate from college by capitalizing on the benefits of a community college. They tend to be very student-oriented with a very compassionate faculty who work with the students at a much different level than at the university level. And once the students get their feet on the ground, there’s a pretty good chance they’ll finish their baccalaureate degree.

5. A year from now, what will you miss about serving on the Board of Regents?

Being around and associated with the university. Knowing there are an awful lot of faculty and staff I never came in contact with – I wish I’d had more time for that. I will miss being updated on the exciting things happening on the campuses on a day-by-day basis. There has been some good camaraderie – I’ll certainly miss that, as well as being part of the decision making of one of Colorado's largest enterprises. It’s been a great experience.

Tagged with:
Bishop, Board of Regents