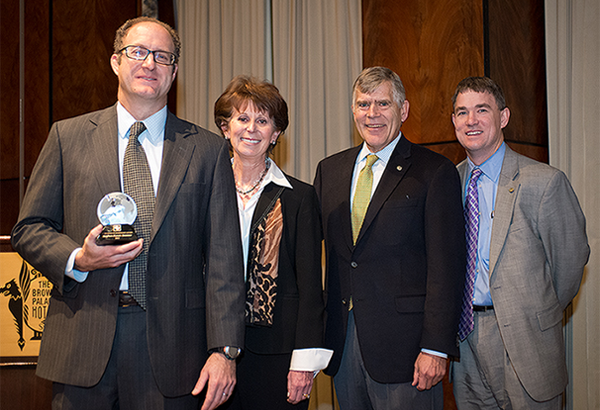 Steve Zweck-Bronner with his Excellence in Leadership Award at last month’s ELP lunch and lecture. He was nominated by Lilly Marks, Don Elliman and Patrick O’Rourke. (Photo: David Sprouse/University of Colorado)

Steve Zweck-Bronner with his Excellence in Leadership Award at last month’s ELP lunch and lecture. He was nominated by Lilly Marks, Don Elliman and Patrick O’Rourke. (Photo: David Sprouse/University of Colorado)

As Steve Zweck-Bronner tells it, he’s simply part of a behind-the-scenes team of service-oriented lawyers.

“We’re here to serve the mission of the university,” he says “We’re the people who should be making life easier for everyone.”

That task, though, is rarely easy. In his role as Managing Senior Associate University Counsel at the University of Colorado Denver l Anschutz Medical Campus, he has helped lead the institution through such challenges as the sale of the former medical campus at Ninth Avenue and Colorado Boulevard and the tremors set off by the Aurora theater attack.

His negotiation of such challenges contributed to why Zweck-Bronner was nominated for this year’s Excellence in Leadership Award by Don Elliman, CU Denver chancellor; Lilly Marks, vice president of Health Affairs, CU, and executive vice chancellor, Anschutz Medical Campus; and Patrick O’Rourke, vice president, University Counsel and secretary of the Board of Regents. Zweck-Bronner won the award and received it from his nominators at the Excellence in Leadership Program’s annual award lunch and lecture Nov. 30 at Denver’s Brown Palace Hotel.

Away from work, his two kids keep him busy. And playing rugby “keeps me somewhat sane. Every now and then, you’ve got to hang around people that aren’t like you to rebalance.”

1. What are the biggest changes you’ve seen over your 20 years at CU, and how have they affected your work?

It doesn’t seem like it’s been that long. Working in the litigation office, I worked for all the campuses for six years. With the move to the Anschutz Medical Campus, I had the opportunity to help do that. That’s a big one affecting me, the creation of the Anschutz Medical Campus and the establishment of two campuses. We took on all the legal affairs of both. As NIH (National Institutes of Health) funding went up and we saw an increase in our research budget, the campus grew exponentially, and we saw all the growing pains with that. Then with the consolidation five years ago, it’s meant there’s never been a dull moment.

2. Your nominees noted your guidance in response to the Aurora theater shootings, as well as shepherding ongoing work related to the former Health Sciences property at Ninth and Colorado. What are the keys to dealing with such varied challenges and their legal ramifications?

With Ninth and Colorado, you’re dealing with a long-term transaction. We had our first buyer in June 2006, and we were in negotiations for a year and a half before that. The economic crisis that came after that was devastating. So this thing’s creeping up on eight years. When you’re dealing with a transaction that takes that many years, you get deal fatigue. Over that time, we’ve had four university presidents and five chancellors, along with several rotating regents. Getting all those people up to speed on the transaction creates an interesting dynamic. I still spend quite a bit of time every week on the deal.

With the (theater shooting), it’s most difficult to struggle with a tragedy like that. Some people on the campus knew Holmes to some extent and some didn’t know him at all. They’re all struggling with how somebody could do something like that. It’s been tough on everyone, especially the students. They’ve been barraged by the press and law enforcement. Most of them just want to get back to work. Hopefully I’ve been able to encourage people, help them understand what’s happening and get them through this time.

3. You completed the Excellence in Leadership Program in 2007. What’s most memorable about that experience?

Meeting people from the other campuses. Having been in litigation, I was very aware of what happened on the other campuses – I knew enough people and what they all did on their campuses. But it’s not until you sit down and work with those people that you get a full understanding of their roles and missions on the campus. You meet some great people. Learning how we all had the same goals but viewed them through different lenses was kind of neat.

4. What advice do you have for anyone looking to improve their own leadership potential?

I think you need to seek out the right people and try to learn from them and what they’ve done. We’ve got phenomenal leaders on this campus such as Don and Lilly, and I’ve learned from watching them navigate complicated relationships. You can take away the good and bad from difficult encounters. When you interact with and work with people you admire, you can take what you admire about them for your own tool chest and make yourself a better leader. I try to take a little bit from all of them.

It was interesting watching the different styles of  different Health Sciences Center chancellors, including  Dr. James Shore,  Dr. Greg Stiegmann and Dr. Roy Wilson. Dr. Shore was a psychiatrist while both Dr.  Stiegmann and Dr. Wilson were surgeons, and they each took an entirely different approach to decision making. The psychiatrist looked at things more globally and was considering three or four moves or issues down the path. The surgeons are hard-wired to get a definitive amount of information, make a quick decision and move on. Their medical training left them with different skill sets, which affected their decisions. Both approaches worked.

5. What do you enjoy most about your work?

It’s a great job. As far as a lawyer job, there’s no job more interesting. You’ve got a great variety of work and you’re working with really bright people who are committed to a great purpose, which is education. I typically get involved  when things go wrong at the university, and it’s important to help people through difficult times so they can do their vital education and research.

I’m a behind-the-scenes guy. My job and the administration’s job is to make the trains run on time so faculty can do what they’re supposed to do. On the other hand, we back-of-house folks, we need to sometimes get away from our desks, step back and understand what a great institution this is. Go to graduation, see what it’s like. It rejuvenates you every time. That’s what keeps you going.