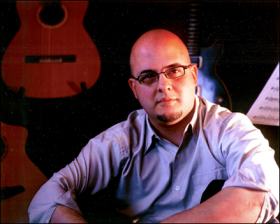 The soundtrack of Rudy Betancourt's biography ranges from the percolating rhythms of Latin America to the lush symphonies of old Europe, from quiet folk to noisy rock 'n' roll. Since July, he has taken his life in music to Macky Auditorium Concert Hall, where he's director of CU-Boulder's venerable venue. Though the 2,600-seat hall didn't open for performances till 1923, its cornerstone was laid Oct. 8, 1910, which inspired a current, ongoing celebration of Macky's first century.

A native of Venezuela who has been in the U.S. since 1995, Betancourt's expertise at classical guitar led to stints performing and recording with the Colorado Symphony Orchestra. He also leads his own trio that melds world beats and jazz influences. But because a shoulder injury has limited his playing capacity, he's happy to work in theater management, taking part in a mission with kindred spirits.

Besides overseeing a staff of 120, three of them full-time, Betancourt works at scheduling events – revenue generators for the university. "Part of the job this year is to raise awareness of Macky as a happening place within the campus and within Boulder," he says. That shouldn't be difficult in the days ahead: The Conference on World Affairs returns for its annual week of speaking engagements and discussions starting Monday; the following Saturday brings comedian Bill Maher to the Macky stage.

1. Before coming to CU, you were director of marketing and communications for Denver's Swallow Hill Music Association. How much of the history of Macky were you familiar with before beginning this job, and what have you learned since then?

(Laughing) It's almost like night and day. I only knew the shows I came to see. I didn't know about the centennial, or how many great events happened here – Yo-Yo Ma was here in the '90s, the Dalai Lama has been here. I didn't know what a big resource it is for the university and for Boulder. A lot of people don't know about that, and we had to change that.

I'm still learning, and I think I'm going to be learning for the next 10 years. We just developed a new website with a blog, we're getting into social media to show people what happens here backstage. We opened a 100-year-old time capsule last fall, and we'll place a new time capsule in the terrace this fall. 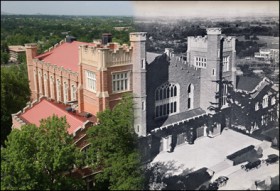 Photo Illustration by Casey A. Cass/University of Colorado
This composite image shows Macky Auditorium in the 1920s and as it looks today.

Photo Illustration by Casey A. Cass/University of ColoradoThis composite image shows Macky Auditorium in the 1920s and as it looks today.

2. As a musician, what do you find special about Macky, and how does your musical experience influence your work as a concert hall director?

What's special is that it's very easy to create an atmosphere. I haven't played on the stage here, but when we had Joshua Redman here in January, he was amazed by how intimate the environment was for him, even though there are 2,000 people here. At other places this size, it seems like there's an invisible wall between the artist and audience. At Macky, it's like they're sharing the same air. The audience is going to have a much greater experience because the artist is doing something he doesn't do every day.

I can understand how the artists need a special atmosphere. Part of that is something as basic as the heating system. We want the audience to be comfortable because they will enjoy the artist more. And the artist will perform well because he won't think about frozen fingers. In the summer, we don't want the artist worried about sweating on stage. We'll have a cooling system installed by June, and that will help us with our summer programming.

If the artist has a great experience at Macky, the artist will tell the manager and promoter. That message spreads, and we can bring in higher-caliber artists. At the same time, the audience is going to go back to their networks and talk about the experience they had at Macky. So it all adds up.

3. Live performance has much more competition for people's time than it did a century ago. What does it take to keep the auditorium a relevant, successful enterprise today?

People may see the same artist on YouTube, but they won't feel that kind of almost religious experience that's at a live performance. The recording industry is in shambles right now. The growth of electronic media is actually stalling. There is something going on in the music realm, and I see live performance coming back in the next few years, little by little. It's an experience you cannot have by yourself in your car or your living room. We have to be creative in our marketing and not look like a dinosaur, but live performance has been with us for 5,000 years. And it has survived. I don't think it's going away.

4. Where's the best seat in the house?

In the middle of the orchestra on the left, closer to the soundboard. It depends on the concert. With amplified rock or jazz, you want to sit as close as possible to the soundboard – that's the case anywhere, not just at Macky. With classical, I tend to sit in the balcony.

I never sit on the center. I sit on the sides. The center is like a photo frame. On the sides, you can see more profiles, it's more three-dimensional, there's more depth than if you're sitting front and center.

5. You and your wife, Rebecca Laurie, are raising your 6-year-old son, Aden, in Englewood. You grew up in Caracas, Venezuela. How will your boy's exposure to music compare to what you experienced as a child?

My dad gave me full exposure to Latin music. My mom exposed me to classical music, especially baroque, and my cousin exposed me to rock 'n' roll. My son's MP3 player goes from the Nutcracker to "Back in Black" by AC/DC to the Banana Splits. It's very cool.

Send your thoughts and suggestions for the Newsletter.
END_OF_DOCUMENT_TOKEN_TO_BE_REPLACED