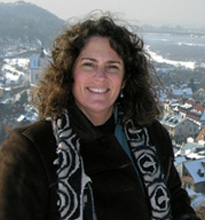 Born in Philadelphia to a Cuban mother and Irish-American father, Andrea O'Reilly Herrera draws on her unusual perspective in teaching literature, women's studies and ethnic studies at UCCS. The associate director of the Women's and Ethnic Studies (WEST) program, she was named a CU President's Teaching Scholar earlier this year. The mother of two daughters and a son also is a poet, essayist, theorist, playwright and novelist — she even painted the cover art for her book The Pearl of the Antilles.

Your ancestry traces back to two of the most distinctive and politically charged island nations in the world: Cuba and Ireland. How have these places and cultural legacies shaped you as a professor, writer and individual?

Both my Cuban and Irish heritages have left an indelible mark on my psyche and my imagination as a writer and an artist.

A witness from childhood to passionate conversations regarding life in exile, I became acutely aware of the emotional, psychic and social conditions under which people dispossessed from their native land adapted and survived. As a result, my political, social and cultural consciousness — as well as my imagination — shaped according to a kind of vicarious or second-hand experience of displacement as well as an idea of Cuba that has since ceased to exist. Though I grew up during the civil rights movement, in many ways I was more aware of what was happening in Cuba than of what was going on around us.

It was only when I began to seriously explore my Irish roots and actually traveled to Ireland that I become conscious of the historical and cultural ties between Cuba and Ireland. In addition to their multiple and deep-rooted geographical and cultural affinities (such as a delicious and oftentimes wicked sense of humor and irony and the ability to weave yarns and talk-story for hours), Irish and Cuban people share a history of colonialism, political struggle and, consequently, displacement. Although much of my work to date has focused primarily on the themes of loss, displacement and the formation of cultural identity as they relate to Cuba, my hope is to begin exploring their connections in respect to Ireland.

In addition to teaching literature and women's and ethnic studies and writing critical theory, you are a published poet, novelist, playwright and essayist. How do you meld the life of a university scholar and researcher with the contemplative life of the artist?

It's a little bit like balancing a hippopotamus on a laundry line. In the United States, virtually the only sanctuary for the writer and/or artist is academia.

This is the path I chose consciously to follow long ago as both a writer and an artist; yet this choice has had its drawbacks. In the first place, academia rarely allows one the space or time for contemplation and solitude. In addition, at most universities creative expression is treated by most academics as something exclusive or unrelated to scholarly work.

To my great fortune, I am a member of a unique academic community at UCCS that values and honors equally scholarship, teaching, creative expression and a commitment to community activism. It is most unusual to find a place that recognizes these multiple aspects of a single self.

Your four books—Remembering Cuba, The Pearl of the Antilles, Cuba: Idea of a Nation Displaced and Setting the Tent Against the House: Cuban Artists in Diaspora—all focus on the interrelated themes of exile, loss and the preservation of cultural memory. Why were those themes so important to you?

I was raised in a diasporic community with a strong sense of cultural roots, though I could not have articulated this as a child. As a result, these themes became central to my own consciousness and, consequently, central preoccupations in my scholarly and creative work. In effect, we were acculturated as Cubans, despite the fact that we were residing outside the island in relative cultural isolation. Although we were treated as exotics on occasion, it never struck me as odd that our home was bilingual.

We had strangers—who didn't speak a word of English—living with us for extended periods of time. We listened to Beny Morè, Frank Sinatra and the Beatles. We somehow learned to participate in five simultaneous conversations at the dinner table while eating an assortment of dishes, including scrapple, cheese steaks, macaroni and cheese, maduros (fried plantains), empanadas, arroz con pollo (chicken and rice), pie de guayaba (guava pie), and malanga con mojito (a tropical tuber adorned with oil and garlic).

As a U.S.-born Latina who writes extensively about her mother's culture, language and heritage, how do you think you and your work are perceived in Cuba and in other Latin American countries?

Due in part to a politics of exclusion that is determined according to historical longevity and degree of economic, social and institutional oppression, Cuban-American literature written in or translated into English still tends to be largely overlooked in current mainstream Latina/o literary criticism in the United States and consequently abroad. It's also understudied in ethnic studies and literature departments.

Cubans possess a long history of exile in the United States, which includes communities established during the 19th century in the decades preceding the war of independence from Spain. But there is a relatively new presence of significant numbers of Cuban refugees and/or exiles following the 1959 revolution. When that fact is coupled with the preferential treatment they received (and in some cases continue to receive) upon their arrival as a result of the Cold War, and their comparative economic success, it "disqualifies" Cuban exiles and Cuban diasporic literature in general from serious or extensive consideration in the view of some scholars. More recently, there has been a visible effort to acknowledge and address the complexity and nuances within and among Latina/o writers in the United States; nevertheless, we still have a long way to go.

What can U.S.-born Latinos teach Latin America about the United States?

There is no single characteristic or experience that captures or defines what it is to be Latina/o. As a result of our peculiar history, coupled with the manner in which Latinas/os are portrayed in the media, there exists in the United States a very particular set of identity politics that is ultimately reductive, essentialist and stereotypical. In reality, people categorized as Latinas/os or Hispanics are vastly diverse in respect to race, ethnicity and culture (the same could be said for Native Americans, African Americans and Asian Americans). And even more profound variations exist within subgroups when one places this question within a larger historical framework.

Although Cubans share a cultural history inflected by Spanish colonialism, slavery and migration with other Caribbean, Latin American, Central American and North American nations, the factors that distinguish us both within our own ranks and among ourselves outnumber those that bind us together. Grasping this notion is fundamental to understanding the manner in which Latino or Hispanic self-identity is formed both within and outside the United States, especially in respect to race, ethnicity and culture. As a result, I believe we have more to learn from Latin America in this regard than Latin America has to learn from us.