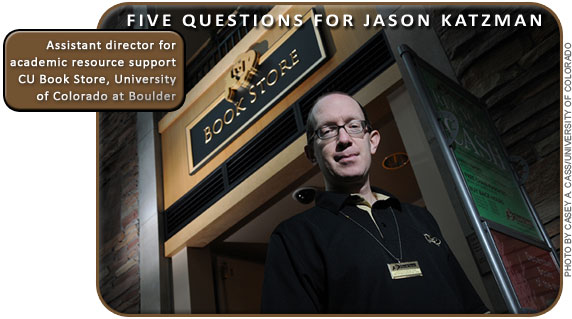 Nineteen years ago, Jason Katzman was a stock clerk at the CU Book Store. The fit was so good, he continued to work there, and has risen in the ranks to become assistant director for academic resource support, overseeing the textbook, general book, supply and computer departments.

He's responsible for making sure students can find the textbooks they need before spring and fall semester classes begin. As a manager, he also provides his staff with direction when it comes to buying other products, controlling inventory levels and dealing with customers.

Away from the store, Katzman has an 11-month-old son who keeps him busy. One night a week, however, he sneaks away for a good poker game with friends.

How do you determine what to stock at the bookstore?
In textbooks, we have a huge inventory during fall and spring rush, but we work very hard to minimize that inventory at other times. This is one of the principle reasons for our success. We have buyers for textbooks, insignia, supplies and technology, and computers. Buying is part science and part art, which kind of means we make a lot of educated guesses. However, I've worked with bad buyers and good buyers and we're fortunate in that we have a lot of good buyers. Our competitors have a lot to do with what we stock ... we try very hard to look at both the good and the bad of it and make ourselves better in every way we can.

Reports say students are buying fewer textbooks. Have you noticed a decline and what do you do to help students with the high costs of some texts?
I think it's accurate to say that students are purchasing fewer textbooks. Whether that's happening because of cost or because the nature of education is shifting slowly away from the book is where the argument is. I think the perception is clearly that the cost-to-value proposition for textbooks is wildly out of whack.

The main thing we do to help students is try very hard to offer as many used textbooks as possible. Doing so involves consistently scouring the market and communicating with the faculty to get book information in a timely manner. I regard our store as one of the more innovative in the country. We're constantly trying new things. We offered e-books very early in their evolution and although we haven't discovered a huge market for them, we have a very good idea of what needs to happen for them to succeed. We'll also be piloting a rental program soon.

Have online book sellers hurt your bottom line?
One thing people don't seem to understand about the differences between the online world and brick-and-mortar businesses is that the latter tend to have a higher cost of doing business. Everything, including textbooks, is cheaper online. So, yes, online textbook vendors like Amazon and Half.com have hurt our business. We sell fewer textbooks to CU students, but continue to be hopeful that whatever increased price there is gets made up for with considerable convenience.

What's the craziest thing you've ever stocked at the store?
When I was the general book buyer, I brought in a book called, "The 50 Greatest College Drinking Games," or something like that. Not surprisingly, it sold like crazy. It didn't take long for somebody to be offended and I found myself in the vice chancellor's office answering some questions. Frankly, I was unapologetic about the entire thing because I felt as though, as a retailer, it was simply my job to offer up interesting products and it was the consumer's decision whether or not they wanted to buy them. The vice chancellor presented his opinion and we had a pretty good argument about it. Even though I disagreed with the decision at the time, we stopped carrying the book. However, I learned a lot from the conversation and that vice chancellor and I remained friendly ever since simply because we had an honest exchange and were able to appreciate each other's opinion, even though we disagreed.

The irony of that story is that now it is my job to make sure that everyone is sensitive about selling items that might have the potential to cause the store headaches.

What do you like most about your job, and if you could change one thing, what would it be?
I like the variety in my job. There's always something new going on. If there was one thing I could change, it would probably be to reduce the number of meetings. It seems that the higher you get on the proverbial administrative food chain, the more meetings you have to attend. I'm starting to appreciate the amount of work we get done in them now, but it's not my favorite thing. That being said, a lot of those meetings have produced some impressive collaboration that's important to the overall mission of the university and communication between the store and other departments.