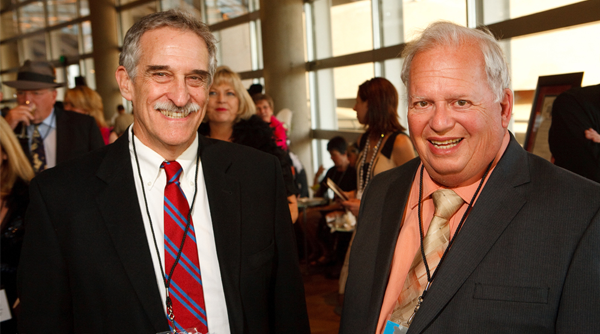 Howie Movshovitz originally started off in the English Department at University of Colorado Denver in 1978, but always knew film was his true calling. He helped charter the film studies program, which has since become a popular minor. He then became the film critic for The Denver Post, a stint that lasted nine years, before returning in 1996 to campus to teach film history at the College of Arts and Media (CAM), where he currently is the director of film education. He also helped get CAM and the Denver Film Society to come together to create the Starz FilmCenter, which opened in 2002.

His accomplishments have reached beyond Denver: He works with both Colorado Public Radio (CPR) and National Public Radio (NPR) to produce features on film. He also has been honored with the task of working as one of only two faculty leaders at the Telluride Film Festival’s Student Symposium.

His most recent success has come with the creation of the Denver Silent Film Festival. After attending the San Francisco Silent Film Festival, he decided a similar event would be successful in Denver. He was right. The already highly acclaimed festival started just last year, with audiences growing from screening to screening. This year’s festival is expected to sell out. Spanning across three days, Friday through Sunday, audiences have a chance to see a wide range of silent films. Shown on 35mm prints, these films will be seen as they were always intended to be seen; they’ll also be accompanied by performances by musicians. For Saturday’s screening of “The Cabinet of Dr. Caligari,” audiences will hear the live musical accompaniment of Donald Sosin, Joanna Seaton and the CU Denver Silent Film Orchestra – last year’s performance was one of the festival’s most popular events. Tickets are on sale now at the King Center box office or online.

When asked why people should attend the festival and properly experience silent films, the CU-Boulder alumnus (master’s and Ph.D. in English literature) said that it’s not about nostalgia or even about understanding or appreciating filmmaking during that era -- people should go simply “because it’s good. It’s not well-known and they’re great films.”

1. How did you get involved with the Telluride Film Festival? What is your role and what has been most rewarding for you as one of the teachers?

About 24 and a half years ago, Bill and Stella Pence and Kate Sibley came to me and said, “We’re thinking of a program for college students.” Then after two years, I talked to Linda Williams and told her she had to join in.

We lead discussions, students meet with filmmakers, etc. And we mediate, we choose students from the applications ... teacher things. I get to participate on an intimate level with what I consider to be the best festival in the world.

2. Tell me about your decision to become a film critic and your experiences working with CPR and NPR.

Well, I sort of fell on it. After making a few films, a filmmaker on the East Coast suggested I try being a film critic ... although this was not a statement on my filmmaking!

The standards for CPR and NPR are really rigorous. It has to be right, has to be good, or else it’s not aired. I get to do work that friends all over the country can hear ... which I love.

3. How do you account for the popularity of the Denver Silent Film Festival?

Last year we noticed that after every film, the audiences grew. We chose good films and we did everything first-rate. The musicians are extremely good. It’s about quality.

4. As the artistic director for the festival, what criteria did you use in choosing the films and which would you most recommend attending?

(The films must) be good, high-quality 35mm prints. We want balance and we don’t want only one kind. We chose different films -- not just Chaplin. Since the festival is new, we chose titles people know.

If you’re only going to one show it depends on who is going. If it’s a friend with a young daughter, go to the “Four Short Comedies.” If he or she is a more sophisticated person, go see “Grass.” It’s spectacular. “Grass” is the gem of the festival. I like all of them since I picked them.

5. Finally, accompanying the films will be “An Hour With Serge and David.” As two of today’s renowned film archivists, they’ll be discussing their work and showing clips of their restorations. Do you think this will be interesting event to those not studying or in the business of film?

Yeah. Serge Bromstead is very funny. He talks, plays piano and occasionally even burns a piece of nitrate film. And he and David Shepard are great friends and have a great connection. I mean, there’s going to be a point if people just have absolutely no interest, but these are two fascinating people and that’s usually good enough.

College of Arts and Media makes masks, music and movies

Send your thoughts and suggestions for the Newsletter.
END_OF_DOCUMENT_TOKEN_TO_BE_REPLACED