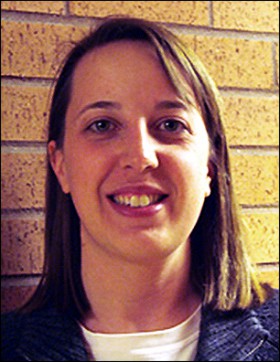 Although progress has been made toward the treatment of substance abuse, there's still plenty of work to be done. Helen Kamens, a research associate at the University of Colorado's Institute for Behavioral Genetics, studies how certain drugs might alter such abuse, and the roles genetics and environment play in certain behaviors.

As a college student, Kamens became interested in genetics. She was fascinated by how genes could influence everything from hair color to behaviors. During a summer fellowship at the National Human Genome Research Institute, she worked as a genetic counselor, and saw patients with connective tissue disorders that cause tremendous pain. Seeing how mindfulness-based meditation helped with patients' pain management gave her some insight into the career path she wanted to follow and she realized how much she enjoyed research.

Over the next few years, she became interested in behavioral genetics (how genes influence complex traits). During graduate studies at Oregon Health and Science University, she took a behavioral genetics approach to try to identify genes that contribute to drug and alcohol behaviors. She spent two years at Yale examining the role of acetylcholine receptors in alcohol consumption; in September 2009, she moved to Colorado, where she works with Marissa Ehringer, Ph.D.

"For many years I had done research on the role of the nicotinic acetylcholine receptors system in animal models and in (Ehringer's) lab I could learn how to explore the role of this system in human populations," says Kamens, who hopes to become a professor so that she can teach and continue her research.

1. As a researcher, what have you found out about substance abuse and what project are you currently working on?

Just over four years ago, a new smoking cessation drug came on the market, varenicline (trade name Chantix). Since alcohol and tobacco are widely co-abused, many people study how this drug might alter alcohol behaviors. While a post-doc at Yale, I published two papers on this, the most recent coming out in December. In the first paper we showed that varenicline reduced alcohol consumption, a finding that has now been replicated in both human populations and animal models. In the second paper I showed that varenicline also altered other behavioral responses to alcohol. At low doses, alcohol can produce motor impairment (ataxia) while higher doses cause sedation, which could be considered negative effects. Varenicline increases both the ataxic and sedative effects of alcohol. Further work will be needed to determine how varenicline decreases alcohol consumption, but it is possible that it may be due to increasing negative effects of alcohol rather than reducing positive (rewarding) effects of this drug.

At the institute in Colorado, I have been using human genetic strategies to determine if variation at genes that code for the nicotinic acetylcholine receptor subunits (the same receptors that varenicline acts on) influence nicotine and alcohol abuse/dependence. We have recently found some positive results with variation in the CHRNB2 gene (the gene that codes for the beta 2 subunit of this receptor) and nicotine dependence. So, the project I am working on right now is to try to replicate our findings in an independent population.

2. How might your research effect change in people's behaviors when it comes to drugs and alcohol?

I think that the importance of my research is in affecting people's behavior by informing us of the underlying biology. For example, if we find evidence that certain genes influence alcohol or nicotine abuse/dependence, it helps point to a biological pathway that might be important for this condition. Once we determine which genes influence these behaviors, and how functionally they affect the behavior, we might then be able to develop targeted therapies.

Additionally, if scientists provide the facts on how drugs interact with the body and what long-term effects they can have, it will allow people to make more informed decisions. Usually, the sooner a person starts using drugs the more likely they are to become dependent. For example, 47 percent of people who begin drinking before age 14 become dependent at some point in their lifetime compared to only 9 percent who start drinking after age 21. Research has also shown that one of the biggest influences children have is their parents. For this reason, education is important.

Alcohol is probably the most dangerous drug used on college campuses today. It isn't simply alcohol consumption that is the major problem, but more specifically binge alcohol consumption. Some studies have reported that 44 percent of students attending a four-year college binge drink alcohol. The consequences of binge drinking are serious. From an academic standpoint, students who binge drink are more likely to miss classes and not complete schoolwork. These students also are more likely to engage in risky sexual activity, vandalism, and drive after consuming alcohol.

The good news is that substance abuse can be treated and there have been many drugs recently developed that aid in drug treatment, including varenicline (Chantix). We know that genetics and environment (society, peer pressure, etc.) both play an important role in drug use. With further understanding of these factors, more targeted therapies may be developed.

3. You recently spoke to young students concerning alcohol and drugs. What did you tell them?

I recently spent an afternoon at Ralston Elementary School in Golden. Dr. Holly Stephens, also a research associate in the Institute for Behavioral Genetics, and I talked to fifth- and sixth-grade students as part of the National Institute on Drug Abuse's National Drug Facts Week. Since many of these kids did not have a lot of experience with drugs, we gave an informational talk about how drugs interact with the brain and the types of effects drugs can produce. For my part of the presentation, I made a model of a neuron and showed how cocaine directly interacts with brain cells.

4. What is your favorite part of the job and why?

My favorite part of my job over the past few years has been having the opportunity to work with some great undergraduates. I have been very fortunate to have had a string of very good students who I got to work with in the lab. It is fun to see students who are excited about science and see them succeed over the years.

5. What types of activities do you enjoy outside your work since coming to Colorado?

Since moving here, I have enjoyed skiing and being outdoors in the wonderful scenery. Whether it be hiking with my golden retriever, Chyo, or just spending time gardening in the backyard, it is nice to have so many sun-filled days to spend time outside.

Send your thoughts and suggestions for the Newsletter.
END_OF_DOCUMENT_TOKEN_TO_BE_REPLACED