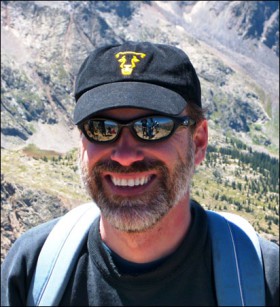 As a new generation of cars moves its way from the conceptual phase to showrooms, a University of Colorado at Colorado Springs professor is right in the middle of the research.

Gregory Plett, Ph.D., currently is working with students, University of Michigan faculty and General Motors engineers to design a battery that will power future electric vehicles. Plett, an associate professor in the department of electrical and computer engineering, received a $750,000 grant to fund research efforts to help develop a battery devoid of the kinks that have so far stalled efforts to make an economically viable power source.

1. How did you become part of the battery design team and what is your role in the research?

Through a series of events that I could not have orchestrated, even had I thought to attempt it. In 2001, our department had a visit from Dr. Dan Rivers, the president and CEO of Compact Power Inc. (CPI), who wanted to see if there was any interest in working on battery design for hybrid electric vehicles. I took him up on the offer.

My research background is in adaptive control systems, which at first seemed very different from the problems encountered in battery pack design. There were, however, some control problems relating to proper battery management, and I started working on these problems for CPI during the summer of 2001.

A hybrid or electric vehicle needs to know two things about the battery state: how much energy is presently available, and how much power is presently available. The energy estimate is like the gas gauge in a standard automobile. It is needed to answer the question, "How far can I drive?" The power estimate tells you how quickly you can remove that energy from the battery without causing damage. It answers questions like, "How quickly may I accelerate?" Both of these estimates require knowing the present internal state of all of the battery cells, in particular, the state-of-charge of all cells in the battery pack (with 0 percent being "empty" and 100 percent being "full"). That's the problem that I focused on, and I was fortunate to be at the right place at the right time to make and publish some contributions that have yet to be exceeded.

In 2005, CPI moved to Detroit to be closer to the Big Three automakers, hoping to attract their business. (Dr. Rivers stayed in Colorado to form a new company; Dr. Prabhakar Patil became the new CEO of CPI.) The move turned out to be a good idea: The GM/Chevy Volt that will be released later this year uses a battery pack design that was co-engineered in the early stages with CPI, and uses battery cells from CPI's parent company, LG Chem of Korea.

In 2009, the University of Michigan and General Motors kicked off a joint program: The GM/UM Advanced Battery Coalition for Drivetrains (ABCD). This joint research effort is designed to get the best available technology into battery electrochemical/materials design and into battery management design to accelerate the launch of the electric drivetrain in a big way. The UM principal investigator for this project is Dr. Ann Marie Sastry, and she has assembled an amazing team of researchers in this field. The research aims to understand batteries from the molecular level all the way up to the vehicle scale, and to leverage that understanding to control battery design and operation to extend battery lifetime. If we can do that, we can build cars that are less expensive up front (because they don't need to be over-designed to compensate for our present ignorance) and are less expensive in the long term (because the battery pack will last the lifetime of the vehicle, never needing replacement).

Dr. Sastry knows Dr. Patil very well. On his recommendation, she gave me a call, told me about the ABCD project, and asked whether I would be interested in joining.

2. It seems to have taken a long time to develop an electric car. Why is that?

From the consumer's point of view, expense and "range anxiety" are the main problems. Both of these boil down to the battery. The battery is presently the most expensive component of the electric drivetrain, and there are worries that it won't last the life of the vehicle (lead acid batteries used in standard vehicles tend to last only about three years or so). It's also expensive to put a very large battery pack in a vehicle for large range (and technically challenging to fast-charge a battery in a way that doesn't cause it to age prematurely). So, from an engineering perspective, if we can fix the battery problem, then we have addressed the issue.

Previous battery technologies couldn't answer these issues, but present lithium ion batteries designed for automotive application have life expectancy of between 10 and 15 years. And, we hope to extend this further, using better battery and control design. So, the lifetime issue is manageable. Battery costs are expected to drop precipitously as soon as we start mass-producing large cells for vehicles, so that will also become less of an issue. Range-extended electric vehicles (like the GM/Chevy Volt) are a kind of hybrid vehicle that can drive about 40 miles on battery power alone, and then up to about 300 miles on gasoline power, so range is not an issue either.

So, I think we're at the cusp of something new.

There are several reasons to move away from gas-powered forms of transportation. From a national security standpoint, it is a good idea to reduce our dependence on foreign oil; from an environmental standpoint, it is a good idea to wean our transportation needs from fossil fuels, and electric vehicles allow this as a possibility. But, honestly, vehicles with electric drivetrain are a lot of fun! Electric motors operate differently from gasoline or diesel engines – they have full acceleration right from zero speed; no need to rev the engine. They also have much greater range of speed, so no transmission is needed (only a simple fixed-gear system). There's much less that can break on an electric vehicle – no oil changes, no tuneups, no transmission. All around, it's a much better way to drive, if we can figure out the battery problem.

3. What other types of research have you done in the past?

I have worked mostly in adaptive controls of one type or another. During my sabbatical, I worked for Dr. Daniel Pack at the United States Air Force Academy designing sensor fusion systems to localize "bad guys" using sensor information from autonomous unmanned aerial vehicles.

4. How did you come to be at UCCS and why did you choose this career path?

I was born in Ottawa, Canada, and grew up mostly in Ontario. As a senior in high school, I was selected to participate in a program called Shad Valley, a four-week summer enrichment program that included an internship at a local technology company, Bell Northern Research (BNR). I worked with BNR throughout my undergraduate degree program in computer systems engineering, and for one year after graduation.

BNR did applied research in the telecommunications area, and consequently hired some really smart people. I had the problem that I couldn't understand what my colleagues discussed over lunch! So, I decided I had better go to graduate school. When I was there, I searched for a research group to participate in. I approached the faculty member who did research in telecommunications, but he had no openings. I approached a different faculty member, Dr. Bernard Widrow, who taught adaptive systems and neural networks (which I thought were pretty cool), but he had no openings either. I knew that if I volunteered for either, and did decent work, I would likely be picked up whenever a position opened up, but which to choose? I could choose the one I knew something about (telecommunications), or the one I thought looked like more fun (adaptive systems). I chose the fun one. No regrets.

I chose an academic career because I saw the most opportunity in it to build up other people. Research is great, and it would be fun to develop a bunch of shiny widgets for some company, but it's nothing like the possibility of helping the next generation of engineers succeed.

I teach courses mostly in control systems: how do we control robots, automobiles, aircraft, batteries and so forth. My favorite part of the job involves anything creative. I especially enjoy creating new courses, and have created more than one new course, on average, each year I have been at UCCS. My least favorite part of the job is anything mundane and routine. I don't much care for grading, so I hire that out whenever possible!

5. What do you like to do when you are not thinking about adaptive systems and batteries?

I'm very much a homebody. I enjoy watching movies with my wife and three daughters on our home entertainment center. We have a weekly family night where we order take-out food and eat dinner with a movie.

When I feel a little more inspired, I work on home improvement projects and build furniture. My most recent project was to build two end tables of my own design from redwood recycled from a former deck, and leftover slate tile from when we finished our basement a few years ago.

My family and I are also very involved in a local church, where I teach an adult Sunday morning class. We're presently studying what Apostle Paul writes regarding constructive interpersonal relationships.