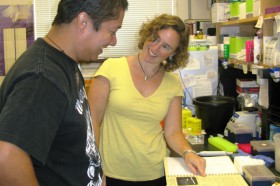 One of Amy Palmer's life goals is to encourage everyone around her to find learning fascinating. Her passion for science is infectious, and the ways in which she explains complicated processes makes you question the wisdom ofnot choosing chemistry as a college major.

Palmer is an assistant professor in the department of chemistry and biochemistry at the University of Colorado at Boulder. She recently was honored with a National Science Foundation (NSF) CAREER Award that will help support her in her attempts to unravel salmonella bacteria's unique way of invading its host. Palmer hopes the research using a fluorescent protein will lead to the ability to block the bacteria's harmful, sometimes deadly, effects. Palmer's lab doesn't want to kill the bacteria, which she says would put a strong evolutionary pressure on it to resist antibacterial medication. Instead, she hopes to prevent the bacteria from getting inside cells and taking over the host.

More frequent outbreaks of salmonella poisoning in food sources, including the most recent in eggs, make her groundbreaking research all the more important.

1. Your research on salmonella has been focused on finding ways to track the bacteria's proteins in order to understand how they create an infection. How are you doing this?

When salmonella-contaminated food gets into your small intestine, there's something about the environment that causes it to turn on a bunch of genes that make proteins. It also creates what people refer to as a needle complex or secretion system, which is a large protein complex that looks like a needle or syringe. Just like a syringe, it's hollow inside. What salmonella does is poke the host cell and injects proteins. The proteins are like a little army that bind with molecules and hijack the cells. As a consequence, the host engulfs the proteins. Salmonella continues the process over and over again, enabling it to survive and replicate inside the host but evade the immune system. Because it is inside our own cells, the immune system can't sense it.

We know the proteins go to different parts of the cell but we know almost nothing about what they are doing and how they manipulate the host. Our research is focused on how to light up the proteins so we can track them in the complex environment of the host cell. We want to label the protein but not affect its function so that we can watch the protein and monitor it over the course of a whole infection.

Over the last 10 to 15 years, cell biologists have gotten good at tracking proteins in cells. A lot of this revolution arose from the discovery and development of the green fluorescent protein. Cell biologists use this naturally occurring protein to enable them to track movements of other proteins.

2. How are you using the fluorescent protein in your research?

The problem with tracking the invasion process of salmonella is that it essentially threads its proteins through a very narrow needle. If we take this beautiful fluorescent green protein and fuse it to the bacterial protein, the space limitation prevents the injection into the host cell and we can't track the proteins. Salmonella has 60 proteins and the invasion process is a coordinated action by a lot of players. Each protein depends on the others and what they do. So we can't take the proteins out of the context of the invasion without changing the process.

It's been a struggle to track a protein while still preserving this complicated invasion process, but we've adapted two technologies. In one, we label a bacterial protein with a small molecule fluorophore. It's cell-permeable, and when it gets inside, it binds to a specific tag that we have put on the protein we are interested in studying and it causes the molecule to turn on the fluorescence. We can then watch it as it gets secreted in the host cell.

We also took the green fluorescent protein and split it into two pieces. One piece is very small; the other is big, about 95 percent of protein. When we break it apart, it is no longer fluorescent. The small fragment is put onto a protein inside the bacteria, and the large is expressed in the host. When the bacteria secrete the protein, the host then contains both pieces, which spontaneously find each other, and the fluorescence turns back on. So now we can light up the proteins and track how they move around inside the host. 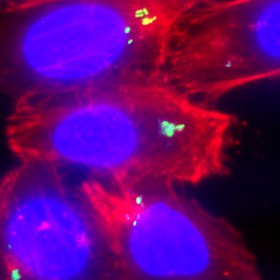 A photo of salmonella taken by Schuyler Van Englenburg, one of Palmer's students. The salmonella is seen as green inside host cells.

3. How did you become interested in chemistry as a career?

I was an undergraduate at Dartmouth College and had an excellent professor who offered me the opportunity to do research in her lab. It really opened up an area of science that I had never seen before. I saw science as open-ended and exciting and creative. I always knew I wanted to go into academics, but I was choosing between a major in Russian and chemistry. When I was in high school, I was in a program called Peace Child, a summer theatrical exchange program between Russia and America. I had gone to the Ukraine and there was something about the culture that fascinated me, so I started taking Russian classes. I would have been in St. Petersburg had I not wound up doing research in this professor's lab. It made me want to be like her in a way, to be able to show students a side of science that we sometimes don't teach, which is the inquiry-based side of things.

I was hired through CIMB (Colorado Initiative in Molecular Biotechnology) and was able to choose my home department, chemistry. CIMB does an amazing, almost unparalleled, job of fostering connections between people in different departments and promoting collaborations and conversations. Sometimes we get so siloed in our departments that we don't talk to each other and CIMB really breaks down those barriers. It enabled me to meet people in physics and engineering and this has led to lots of collaborations. I identify as a chemist, but my research is all over the map.

4. What is one of your life goals?

When I think of myself and my trajectory of how I ended up here, I feel like I was fortunate because I interacted with people who either helped cultivate or deepened by love of learning. In the case of science, it was this one female professor who showed me a different side of science and tried to get me excited about learning and the world around me. When I think of myself both as a teacher at the university or as mentor to my students or a mom, I think my primary goal is to see if I can somehow impart or encourage people to find learning fascinating. I want them to be inquisitive, to look at the world around them and say, "Wow, this is exciting," and to not limit themselves.

5. What is your life like outside the lab? Scientists, even chemists, are sometimes stereotyped as nerdy. How do you feel about that?

I have two small kids - a 51/2-year-old son and a 3-year-old daughter - and much of my time is spent with them and my partner who also is a faculty member at CU. We go camping and we taught both kids how to ski. My 3-year-old likes to be out of control, so we keep her on a leash on the slopes to make sure she doesn't crash into everyone else. I used to do rock climbing; it was a passion through grad school, but it's harder to find time as a faculty member and your sense of safety is very different as a parent.

As far as stereotypes are concerned, I experience that all the time. If you go to a party, and people say "What do you do," and I tell them I'm a chemist, 85 percent of the time their response is, "Wow. I hated chemistry in college." I think scientists oftentimes are portrayed in the popular media as being not quite socially adept, or not being able to interact or communicate in certain situations. I don't like to think that categorizes me. I do get incredibly excited about scientific questions. Does that make me nerdy? I spent most of my childhood climbing trees and I was a competitive swimmer; I was not hidden away in my garage with a chemistry set. One of the reasons I wanted to become a professor is to show people that there's not one way to be a scientist or a professor. There are lots of ways of doing this job.

Send your thoughts and suggestions for the Newsletter.
END_OF_DOCUMENT_TOKEN_TO_BE_REPLACED