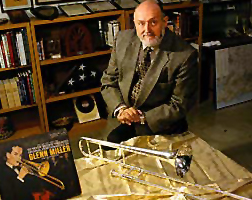 Alan Cass' roots run deep at the University of Colorado at Boulder: Both his parents worked for the university, where he began his own career in 1959. The longtime PA announcer for Buffs football and basketball games officially retired in 1998 as director of the Coors Events/Conference Center and assistant athletic director.

His family tree also happens to intertwine with that of a CU legend: Glenn Miller, the big band icon who attended the university before conquering the pop music world during the 1930s and '40s. The connections inspired Cass to establish the Glenn Miller Archive, for which he continues to serve as curator. Cass gives a free multimedia presentation on Miller's life at 10 a.m. Saturday, Oct. 24, in Eaton Humanities, room 150. A reception follows the event, presented by Friends of the CU Libraries. For details, call Linda Harkness at 303-492-7511 or go to the University Libraries Web site.

How did you become curator of the Glenn Miller Archive?

I'm distantly related to Glenn Miller's wife's side of the family. Her family and my family were all pioneers in Boulder County. So there was always this mystique that we were related, even though it was only through marriage.

Naturally, when I was growing up in the 1950s, the big bands were still around. I listened to the music and danced to it at the Trocadero Ballroom in Denver. In 1969, while I was working at the University Memorial Center, I suggested we set up a small display case dedicated to him in the Glenn Miller Ballroom. We got the word out that we were collecting items, and the story got picked up by a wire service and ran around the world. Suddenly, things just started showing up in the mail. Over the years, it grew into a major collection.

How large is the collection?

We have an archive room on campus where it occupies a considerable amount of space. We have every recording he ever produced in a studio, as well as many private recordings — air checks of radio shows that he would use to critique the band. We have 2,000 photographs of him, from his infancy on up until his death in 1944. We've started digitizing the photos and music, which is on 78s, LPs and cassettes.

We have some nice display space in the Heritage Center in Old Main, where we've dedicated a room to him. We're really not a museum — we're an archive. Our main goal is preservation. But we are looking forward to having more of these things on display in the next year or two, hopefully in a building that's part of the library system. We want the material to be more accessible to fans, students and faculty, so they can get an idea of who this guy was.

Which items do you find the most noteworthy?

Three come to mind. We have his first trombone as a young musician. We have his college trombone, as well, which he used while attending CU in 1922 and 1923. We also have the first gold record ever presented in the recording industry, dated Feb. 12, 1942, for sales of more than 1 million copies of "Chattanooga Choo Choo."

That first trombone — we loaned it to the Grammy Museum in Los Angeles in January. It will soon come back after being there a year. We've loaned things over the years to the museum in Fort Morgan, where Glenn Miller grew up. He was born in Clarinda, Iowa, where they're opening the Glenn Miller Birthplace Museum next year, and we'll loan items to them, too. We're more than happy to share.

How did his CU experience influence his career and his life?

Part of why he was so successful was that he was a smart businessman, and he learned a lot of that at CU. This is where he met his wife, too. He really loved Boulder and the university. He would frequently dedicate tunes to the university and the folks back home. The world premiere of his movie "Sun Valley Serenade" was in Boulder in 1941.

It's interesting — he got a failing grade in harmony class at the School of Music. He could have given up, but he continued, and look what he achieved. Harmony was a hallmark of his achievements.

He always professed that he would come back to CU and maybe finish his studies. He said he would love to teach. He never got that opportunity.

What's the most misunderstood aspect of Glenn Miller's legacy?

Some have said he wasn't the greatest trombone player, and he would be the first to admit that. But he was one of the top players, and the No. 1 or No. 2 arranger of big band music. He really had his finger on the pulse of what America wanted in music. I point to the record: In 1940, he had 45 tunes in the top-seller charts. Nobody before or since has equaled that mark.

He was enamored of classical composers. He was a genius, had a very analytical mind, and was a terrific businessman. He was unique in that he could do so many things. Still, I think he would be quite humbled there's been so much attention given to him.