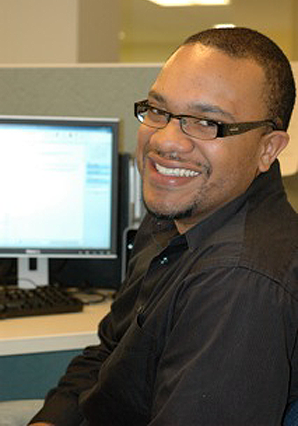 The late Ron Wisner’s words of encouragement never left Branden Williams, counselor, Office of Financial Aid, and a candidate for a master’s of arts in leadership.

“Dr. Wisner introduced me to the student affairs in higher education program,” Williams recalled recently. “When I told him I wanted to work for UCCS someday – an idea that seemed totally impossible – he was encouraging. I never forgot that.”

Wisner was dean of students from 1979 to 2003 and died in a 2010 bicycle accident. His words to the young communication undergraduate student kept Williams on track. He earned a bachelor’s degree in communication in 2004 and began work as a professional corporate illusionist.

“I used magic to emphasize a corporate mission or message, usually as part of trade shows,” Williams recalled of his past career. “If the message was about increasing profits, I might do a trick where a coin appeared.”

Self-employed, Williams said he enjoyed his work both on the stage and behind the scenes making his own marketing materials. But he eventually tired of being in the spotlight. He wanted to do for UCCS students what had been done for him.

“I decided it was time to start contributing more to society,” Williams said.

The thought of returning to UCCS and pursuing a master’s degree was daunting. Williams admits to having earned average grades during his undergraduate career and taking the Graduate Record Exam scared him.

“Eventually, they took all my excuses away,” Williams said of faculty and staff in the program. “At that point, I decided that’s what I wanted to do – use my creativity to help others who were saying, ‘College is too hard.’”

As a student employee for the Office of Financial Aid, Williams created light-hearted videos about subjects that usually don’t bring smiles to students or their parents’ faces including completing the dreaded Free Application for Federal Student Aid or discussing costs of attending college. His “Money Matters” series drew the attention of managers and Williams was hired for a full-time position earlier this spring. To see Williams’ videos, visit http://www.youtube.com/uccsfinaid.

“The past two years have been amazing,” Williams said of his return to UCCS. “I’m glad to have achieved my dream of working at UCCS.”

Tagged with:
Office of Financial Aid

Send your thoughts and suggestions for the Newsletter.
END_OF_DOCUMENT_TOKEN_TO_BE_REPLACED