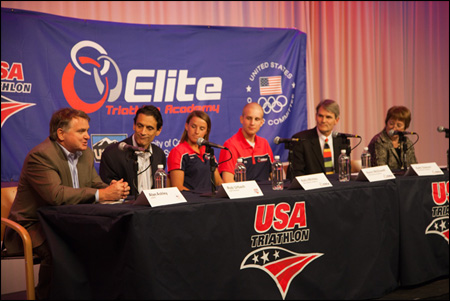 Representatives of USA Triathlon, the United States Olympic Committee and the University of Colorado Colorado Springs announce the establishment of the Elite Triathlon Academy during a Tuesday, June 7, news conference at the university. [Photo: Jeff Foster

A new landmark program at the University of Colorado Colorado Springs will provide elite young athletes the opportunity to earn a top-notch college education while benefiting from a full-time coach and the country's best training resources.

The Elite Triathlon Academy at UCCS will launch this fall with national-level support from USA Triathlon and the United States Olympic Committee, both based in Colorado Springs.

The ultimate goal of the program – directed by Keith Dickson, founder of the Illinois-based Multisport Madness Triathlon Team – is to develop potential Olympic triathletes into medal contenders on the sport's biggest stage. Five of the nation's best emerging multisport athletes, including 2010 Youth Olympic Games medalists Kevin McDowell and Kelly Whitley, compose the first class of the Elite Triathlon Academy, which will enroll at UCCS in August.

In the past, top junior triathletes in the U.S. often chose to pursue running and swimming at the collegiate level because of the availability of scholarships. The Elite Triathlon Academy will identify potential Olympians and allow them to continue their multisport development throughout their college years with the potential to earn a collegiate scholarship.

Academy student-athletes will attend UCCS, one of the fastest-growing universities in Colorado and the nation, and will have full access to the resources of the nearby U.S. Olympic Training Center, a full-time coach and UCCS athletic facilities.

"This program will strengthen the United States as a competitor in international triathlon by giving young, elite triathletes the opportunity to train specifically for triathlon during their college years," Dickson said. "The combination of UCCS, which already has 29 Olympic athletes on campus, the U.S. Olympic Training Center, our nation's finest young triathletes and proven coaches and mentors will make this a successful venture from the start. 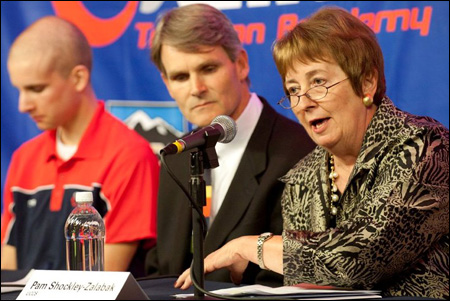 "Thanks to the formation of the Elite Triathlon Academy, every youth and junior triathlete in the country can now strive to earn a university scholarship in the sport of triathlon."

"This program will encourage the top junior athletes to stay in the sport during their formative collegiate years, and they'll receive a quality education while striving for the Olympic podium," Urbach said. "The sport of triathlon in the United States has benefited tremendously from its inclusion in the Olympic Games, and sustained success by American athletes internationally will help take our sport to new heights on many different levels."

"Colorado Springs is an athletic mecca," said UCCS Chancellor Pam Shockley-Zalabak. "The university's partnership with USA Triathlon will bring top athletes to our region and provide them with the opportunity to excel athletically as well as academically."

The Elite Triathlon Academy is an example of the Olympic Movement and a leader in higher education joining forces to develop a groundbreaking program that will benefit the entire Colorado Springs community.

"As we look to allocate resources, we're constantly working with NGBs to develop customized and creative athlete support programs that make an impact," said USOC CEO Scott Blackmun. "The Elite Triathlon Academy, which provides athletes with high performance training and an education, is exactly the kind of innovative and targeted program that we're looking to support. I'd like to congratulate USA Triathlon and UCCS for making this program a reality and I look forward to welcoming these triathletes to Colorado Springs in the fall."

USA Triathlon High Performance Senior Manager Andy Schmitz and USOC Sport Performance Director Scott Schnitzspahn will serve in advisory roles for the academy. UCCS Vice Chancellor for Administration and Finance Brian Burnett, who negotiated the agreement, will serve as the academy's key contact with the university and will manage its business relationship with the program.

Chancellor Memo: HLC thanks, next steps

Send your thoughts and suggestions for the Newsletter.
END_OF_DOCUMENT_TOKEN_TO_BE_REPLACED