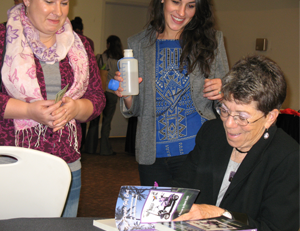 Ronni Sanlo signs copies of her book “The Purple Golf Cart: The Misadventures of a Lesbian Grandma” for attendees of “Reaching Out to Friends and Allies,” Friday’s GLBTI systemwide symposium at CU Denver.

About 50 faculty, staff and students from across the University of Colorado took part in Friday’s “Reaching Out to Friends and Allies: Building the GLBTI Community,” the debut of a systemwide symposium presented by the CU Faculty Council and its GLBTI Committee.

The daylong slate at St. Cajetan’s Church at the University of Colorado Denver on the Auraria Campus included speakers, multimedia presentations and group discussions.

One of the event’s two keynote speakers, Ronni Sanlo , Ed.D., a California-based author, educator and consultant on LGBT issues across the country, dedicated her talk to victims of bullying and cyber-bullying, and showed photos of several children and young adults who took their own lives. She also included a photo of Matthew Shepard, the 21-year-old University of Wyoming student who was murdered in an anti-gay hate crime in 1998.

Noting that October is LGBT History Month, Sanlo offered a history of LGBT culture that began in ancient Mesopotamia and continued through today. She also told her life story, beginning as a child who had a crush on Mouseketeer Annette Funicello, continuing through her closeted youth and, at age 25, marriage to a man. Seven years later, she came out; as a result, her marriage ended and she lost custody of the couple’s 6- and 3-year-old children.

Her higher education career included the launch of Lavender Graduation at the University of Michigan. She is recently retired from UCLA as senior associate dean of students, professor/director of the UCLA Master’s of Education in Student Affairs, and Faculty-in-Residence.

“My only purpose is to create safe and welcoming campuses for everyone,” said Sanlo, who added that she was not on a mission to change people’s minds.

Sanlo said university faculty and staff have an obligation to not tolerate ignorant or hateful speech, whenever and wherever it might arise.

“We have an obligation to speak up and fight back,” she said. “When faculty don’t speak out, it normalizes abuse.”

Other priorities for higher education: research on retention of GLBTI students, and reassessment of curriculum – for instance, do civil rights courses include the role of gays?

Mark Groshek, M.D., physician lead for eHealth at Kaiser Permanente Colorado and assistant clinical professor of pediatrics at the University of Colorado School of Medicine, delivered the other keynote speech and also presented a video used at Kaiser Permanente to raise awareness of GLBTI issues within the health care community.

The day began with a welcome from CU Denver Provost Rod Nairn.

“We frequently pride ourselves on being the most diverse research university in the state, in terms of faculty, staff and students,” he said.

Two members of the CU Board of Regents also appeared at the event. Chair Michael Carrigan and Irene Griego spoke to the group, talking about the role of the board at the university and thanking the attendees for their work, including contributing to diversity and inclusion efforts.

“This may be the first of several such events like this,” said Thomas Riis, who co-chairs the Faculty Council’s GLBTI Committee with Corinne Harmon. “We want to continue to build a community that welcomes all of its members.”

Tagged with:
Auraria, Board of Regents, Carrigan, Faculty Council, Griego