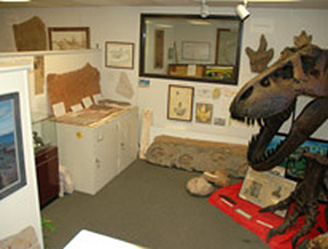 Tucked away in the basement of St. Cajetan’s on the Auraria Campus is one of the smallest, most unusual museums in the country.

Barely the size of a one-bedroom apartment, the Dinosaur Tracks Museum holds the largest collection of fossil footprints anywhere.

The little-known gem may have modest space and popularity, but it boasts the most diverse collection of fossilized dinosaur tracks in the world.

Now, after nearly 12 years at the University of Colorado Denver, it will be moving to CU-Boulder next summer with the retirement of Museum Director Martin Lockley, Ph.D.

Karen Houck, Ph.D., a research professor for the museum, works in an office where the walls are lined with bookshelves jammed with journals and papers about dinosaurs. Molds of fossil footprints – some as small as crow’s feet, others wider than an elephant print – fill the room.

“We have tracks from 20 different countries and all (prehistoric) ages,” she said.

Houck said that a few museums have more fossil footprints, but none have as many specimens as the 2,700-plus at CU Denver.

The museum is hiring a contractor who specializes in transporting valuable, fragile items to move the fossils to Boulder. Last summer, they started moving the museum’s collection and will finish the work next summer.

The mission of the museum is to protect and preserve the fossil resources and serve as an educational tool for the university. The College of Liberal Arts and Sciences has used it for research; organizations worldwide frequently request help and expertise from its staff.

Lockley’s 30-year career is well-documented throughout the museum, which includes a footprint from a Tyrannosaurus Rex along with its bony skull adorning one corner. Alongside them is a framed, front-page photo of Lockley from a 1993 story in the Rocky Mountain News detailing how CU Denver discovered the first T-Rex footprints.

“Before I started, there was a misconception that fossil footprints were rare and not very useful,” he said, “but it turns out they’re very abundant and very useful. Fossil footprints represent the living animal, so we get a lot of information about behavior that we wouldn’t get from bones.”

Houck said many students have used the museum for their studies. Classes from around Denver have visited for tours. She noted that students help with operations and have contributed to many of the almost 700 publications the museum has produced.

Jesus Orozco, a 20-year-old undergraduate student with a major in geography, has been working at the museum for nearly a year. He says he will miss the networking opportunities when it moves.

“It’s been helping me in my classes,” he said. “I’ve been able to meet people within the geography department.”

Lockley’s knowledge has attracted worldwide attention. He said foreign organizations contact him for help with proposals to preserve fossil sites and other historic landmarks.

Although his work stretches around the globe, he stays busy with new discoveries close to his office.

“For fossil footprints, Colorado and Utah are just exceptional,” he said. “If someone told me I couldn’t study outside of Colorado, I certainly wouldn’t run out of studies.”