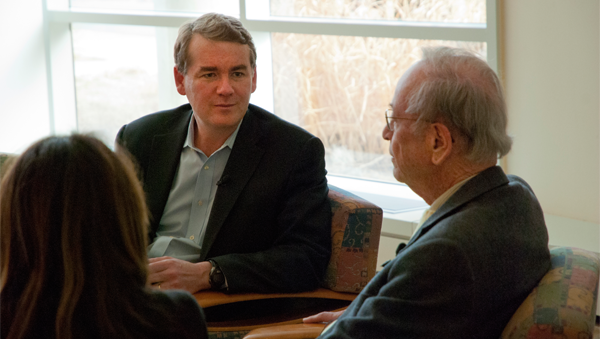 Sen. Michael Bennet speaks with a patient at the Anschutz Medical Campus.

Three very different people gathered recently at University of Colorado Hospital. They were linked by leukemia.

Larry Rosenberg is an 81-year-old leukemia patient at the hospital. Dan Pollyea, M.D., is treating Rosenberg. And Michael Bennet is a U.S. senator from Colorado who helped fast-track a drug that is helping Rosenberg and patients like him.

Rosenberg has chronic lymphocytic leukemia (CLL), a cancer of the blood and bone marrow that is the most common form of leukemia in adults.

Until recently, Rosenberg had been having a rough go of it. His cancer had worsened but chemotherapy hit him so hard that he decided to discontinue it. Then his daughter found a clinical trial of a new drug combination that Pollyea, an assistant professor in the CU School of Medicine, is leading.

Rosenberg became part of the clinical trial in September. It’s not a cure. But it’s helping.

The drug is ibrutinib. In technical terms, it is a tyrosine kinase inhibitor (TKI). In plain terms, a TKI battles cancer at the molecular level by restoring the “on-off switch” the body uses to regulate cell growth.

“Things will never be the same”

Clinical trials such as the one Pollyea was leading showed hope with ibrutinib – in combination with another drug called lenalidomide  -- with relatively small side effects. Stanford and Ohio State universities are supporting the research.

“This is a game changer,” Pollyea says. “Things will never be the same for this disease since the introduction of this drug.”

This sort of collaborative endeavor is a hallmark of the University of Colorado Anschutz Medical Campus, which pulls together research, health care and education on more than 200 acres in Aurora.

The promising clinical trial, however, is only one step. Getting a drug into common use, so all patients can benefit from it, can take a decade or more.

That’s where the federal fast-track, and Bennet, come in.

A Food and Drug Administration (FDA) reform bill two years ago included a “breakthrough therapy” provision that Bennet, a Democrat, helped write, along with Republican Sens. Orrin Hatch of Utah and Richard Burr of North Carolina. The provision created an expedited pathway to approval for certain lifesaving drugs, like ibrutinib, that show dramatically positive results early in development.

Ibrutinib received “breakthrough therapy” designation in April 2013, one of about 40 treatments to win that status since the law passed in 2012.

And this month, just 10 months after receiving that breakthrough status, the FDA approved it for widespread use with patients fighting the type of leukemia Rosenberg has.

So while Rosenberg had access to the drug through the clinical trial, the fast-track means it now is widely available.

Bennet was happy to meet a patient who is benefitting from the fast-track process.

“Ultimately, what this means is that we’re giving more patients around the country, like Larry, faster access to lifesaving therapies so they can live longer, healthier lives,”  Bennet says.

But nobody is happier about this than Larry Rosenberg.