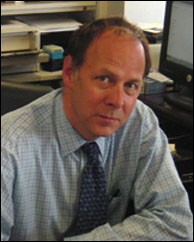 Dr. Peter Buttrick is the head of the Division of Cardiology at UC Denver.

University of Colorado researchers across four campuses received more than $711 million in sponsored research funding in fiscal year 2008-09, a record high that reaffirms the university's position as one of the top public research universities in the United States.

"CU faculty researchers are among the top in the United States, and their success this year will allow them to build on their work in areas of compelling state and national need, such as health care and biosciences, renewable and sustainable energy, geosciences and aerospace engineering," said CU President Bruce D. Benson. "The funding they bring in, mostly from the federal government, also has a significant positive multiplier effect on Colorado's economy."

While such funding is important to public research universities, funding entities earmark it for specific projects and research, and the university cannot apply it to a general fund to pay for operating costs such as faculty and staff salaries, technology, utilities and capital improvements. As such, general funding from the state continues to be an important source of support for the university.

Recent examples of sponsored research contributions to CU campuses include: