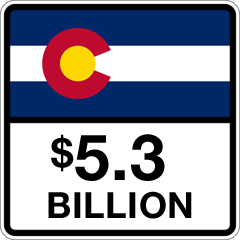 In the most comprehensive research yet conducted on what the University of Colorado means to the state’s economy, analysts show an economic impact of $5.3 billion for Colorado in 2011.

The research, conducted by the Business Research Division of the Leeds School of Business at the University of Colorado Boulder, provides the most comprehensive data yet compiled on the statewide economic impact from the university and the individual effects on Metropolitan Statistical Areas (MSA) with CU campuses.

“CU is a substantial, stable economic driver for Colorado that not only produces a highly educated workforce, but also creates jobs and companies in our state,” said CU President Bruce D. Benson. “Our faculty researchers also bring hundreds of millions to Colorado, which has significant ripple effects in key sectors of Colorado’s economy.”

The study was conducted by a team of researchers in the Leeds School of Business, led by chief analyst Richard Wobbekind. The team worked with campus business analysts, the Office of Technology Transfer in the University of Colorado system, and the offices of sponsored programs, as well as those from private-sector companies. They examined data compiled from fiscal years (FY) 2009-11, with a strong focus on numbers from FY2011.

“We looked at economic impacts on Colorado based upon examinations of operating expenditures, capital expenditures, employee salaries and benefits, and construction,” Wobbekind said. “What we found was a wide and deep economic reach: CU’s 57,400 students and 27,483 faculty, staff and student workers were engines of activity both as spenders and as generators of economic activity.

“The snapshot we generated illustrates just how economically productive CU is for the state of Colorado,” Wobbekind said, though he added that the study did not quantify the economic impacts of the nearly 200,000 CU alumni living and working in the state, nor did it quantify impacts derived from most visitors (visiting professors and researchers, alumni, sporting event spectators and others).

“Adding in those visitors would result in additional benefits to Colorado’s economy, primarily the hospitality sector,” Wobbekind said. “These impacts are subjects of future research.”

Other studies in recent years had calculated CU’s annual economic impact on the state to be as high as $6 billion; this latest CU analysis is intentionally conservative and is based on more accurate methodology.

Among the research group’s findings, which are available in a complete report at http://leeds.colorado.edu/brd#universityofcoloradoeconomicimpactstudy, are the following:

Send your thoughts and suggestions for the Newsletter.
END_OF_DOCUMENT_TOKEN_TO_BE_REPLACED