Hoping to build a $53.8 million health and wellness center on the Auraria Campus, CU Denver student representatives on Friday asked the CU Board of Regents to support the pursuit of student fee increases – a financing proposal that drew mixed reaction from board members.

“In the past people would say that our nontraditional campus with our nontraditional students makes community difficult to build at the CU Denver campus,” said Scott Cao, student body president, one of seven students who appeared before the board. “But with the opening of our student commons building this year, we have seen an unprecedented increase in student community and school spirit.”

Cao said that in only four days, student government was able to tally 1,022 signatures in support of the center. 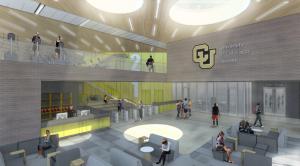 “Hundreds of students are asking for more from CU Denver. If we see such an increase in community life from just an academic building, what will we see from a wellness center?” Cao said. “In Texas we have a saying, that once you taste mama’s homemade pie, you’re gonna want some more.”

If the fee is approved by the Board of Regents at the March 30 board meeting, it will then be voted on by CU Denver students April 19, and then the Auraria Board of Directors. If approved by the students and Auraria board, a detailed presentation of the construction project will be provided to the regents’ capital subcommittee in May. The students’ timeline indicated a target opening date in spring 2018.

Although Cao and center supporters suggest that building community will foster retention, recruitment and graduation rates in a significant way, some regents were skeptical.

Regent Stephen Ludwig noted 35 percent of CU Denver students are Pell eligible and many students would have to take out additional student loans for roughly $2,000 in added fees, which would accrue interest and would in the long run cost students more than $1,000 in added interest alone.

“I don’t think it’s a fiscally responsible way to go about this,” he said. “I love the fact – and this is where it breaks my heart – I love the big idea you’ve come up with. I love that you’re here, I love all this great work and you’ve worked closely with the administration and I think you’ve put together a great plan. I just can’t support it. It’s too expensive.”

Regent Sue Sharkey agreed with the need and applauded the students for their passion, but also said the proposed fees were too high.

“I think it’s a beautiful facility, a beautiful idea. I would love to have that and I can see the value and the need for it,” she said. “(But) I would say no to that student fee. What I’d like to see is some effort being made toward reaching out to potential donors … to find other revenue sources other than putting that burden onto our students.”

“The Denver campus really needs this,” Shoemaker said. “You don’t have a UMC (University Memorial Center at CU-Boulder) on your campus; you have Academic Building 1 and any of us who have been there have seen kids all over the stairwells just sitting around trying to talk to each other. This can be a great addition to your campus. It’s the only one of our campuses that does not have such a facility, and that’s not fair.”

Said Griego, “I think this issue is about equity. Our other campuses have had the opportunity to go to their students and see if they wanted to increase fees. I believe that the students and your campus deserve that opportunity, too.”

“I’d like to see it get done,” Gallegos said. “My concern is that we’re going to outprice ourselves in the market.”

The Office of the Vice President of Budget and Finance presented to the board a breakdown of how CU’s student fees per year compared to those of other institutions across the state. Currently at $1,741, CU-Boulder’s fees were the highest of CU’s three nonmedical campuses but still lower than Adams State, Western State, Colorado School of Mines, Colorado State (Fort Collins) and Colorado State Pueblo.

“My concern is that the money is not being used for what the original intent was,” he said. “What I don’t know is … is it really because that class costs an extra $15 to put on? Or is it because that department has something it wants to do and it’s the easiest way to get the money to get that done?”

Ludwig noted that CU Denver has an audit process that ensures fees are used only for what was approved and asked the other campuses for proof of accountability. CU-Boulder and UCCS campus leaders said audits had been done to ensure proper use of fees, but agreed to undertake additional reviews.

The regents will vote on the fee proposals for all campuses at the March 30 board meeting at 1800 Grant St.