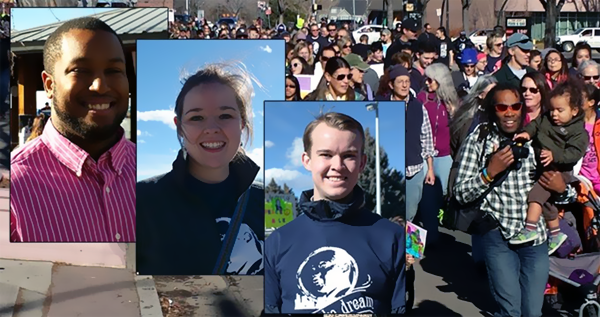 Unity was the theme at the city of Lafayette’s annual Martin Luther King Jr. March for Peace and Celebration.

Monday’s march marked a decade of civic involvement from undergraduate leaders in the University of Colorado Boulder’s Public Achievement (PA) program as well as primary and secondary students in the Lafayette Youth Advisory Committee, who host the event—featuring service projects and student performances—in commemoration of King’s birthday. The CU community played a larger part in the event’s unfolding this year by staging slam poetry and crowd singing led by two of Public Achievement’s members.

The march began at the northwest corner of West Baseline and North Public Road and ended at LaMont Does Park. The celebration began with the Kutandara Center’s Shamwari and Tamba Teen Bands followed by a recital from Second Baptist Church’s Shekenah Glory Choir. Actors in Motus Theater’s Do You Know Who I Am? cited monologues and CU Poetry Slam winner Toluwanimi Obiwole read social justice poems. The CU Student Government president of student affairs Jeudon Kebede and students from the Lafayette Youth Advisory Committee also gave talks. The Public Achievement program and CU’s Alpha Phi Omega, a service fraternity, supervised service projects carried out by K-12 students during the event.

“The CU Student Government, Public Achievement and other CU-Boulder groups, are all pleased to have an opportunity to strengthen our relationship with the city of Lafayette and celebrate Dr. King's work alongside community members,” said CU Student Government President of Student Affairs Juedon Kebede.

Such a large turnout called for a new venue. “We’ve simply outgrown the space we’ve used in the past,” said Elaina Verveer, director of CU Public Achievement.

About 100 people from the CU community were involved alongside “700 to 1,000 community members,” she added, a result of networking led almost entirely by youth leaders.

Annika Erickson-Pearson, a senior and teaching assistant in the Public Achievement program, pulled together her resources at CU to organize participation from the school.

“I think that we can always do a better job of engaging the different groups around us and this is such a phenomenal opportunity (to do so),” said Erickson-Pearson, who—along with PA teaching assistant Collin Gilbert—closed Monday’s gathering by leading attendees in singing a social justice song.

When she joined Public Achievement last spring, she oversaw a group of students at Centaurus High School start a resource center for the school’s homeless students in partnership with the Sister Carmen Community Center by gathering sleeping bags, winter clothing and other donations.

Because school-age children in Boulder County continue to live in poverty, she sees the program as making a major impact. The resource center is “a really impressive outcome of a Public Achievement project,” Erickson-Pearson said. “It’s something that is tangible and directly benefiting the students’ community.”

Another PA teaching assistant James Bradbury, a senior and political science major at CU, managed digital media for the march. His role as a teaching assistant evolved when he enrolled in Renewing Democracy in Communities and Schools, a course designed to explore topics like local activism and diversity by allowing students to lead a Public Achievement project. At Pioneer Elementary last spring, he helped students start an art wall project to help end vandalism and graffiti in Lafayette. The children presented their idea to the city council.

The program is unique in that the K-12 students direct the projects, Bradbury said.

“We’re really trying to get kids involved early and often in being good citizens and being a part of their communities,” Bradbury said.

Reflecting on the Michael Brown ruling and other nationally discussed events that have occurred in the past year, Bradbury hopes King’s philosophy of peace resonated with participants at the march.

The CU Public Achievement program is a part of CU Engage, the Center for Community-Based Learning and Research. The program is part of an international organization led by college students who teach K-12 youth how to effectively address social issues and make a difference in their community. This year, undergraduate leaders are working with students from Centaurus High School, Casey and Angevine Middle School, and Creekside Elementary. Public Achievement is partners with the I Have A Dream Foundation in Boulder County.

Initially, primary students from the Escuela Bilingüe Pioneer founded the march. The students, now in high school, were the main hosts of Monday’s event.