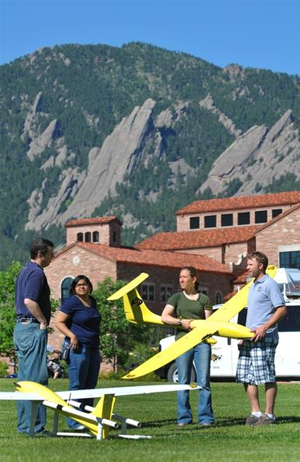 A state application organized by the University of Colorado Boulder has been submitted to the Federal Aviation Administration for the development of one of six unmanned aircraft systems test sites slated to be established across the United States.

Submitted this month, the seventh and final volume of the Colorado application is one of 50 proposals from 37 states for designated Unmanned Aircraft Systems, or UAS, test sites. UAS come in various sizes ranging from hobby airplanes to aircraft with wingspans as wide as commercial jets. While they can be used for tasks ranging from forest fire support and search and rescue missions to oil and gas exploration and military operations, a growing number of science efforts are being undertaken using UAS, said CU-Boulder aerospace engineering sciences Associate Professor Eric Frew.

CU-Boulder has one of the most comprehensive UAS science programs in the nation, said Frew, who directs CU’s Research and Engineering Center for Unmanned Vehicles, or RECUV. CU-Boulder’s UAS projects have included monitoring seal populations in the Arctic and charting sea ice changes near Greenland to intercepting storm cells associated with tornadoes in Colorado, Kansas and Nebraska and measuring gaping holes in Antarctic sea ice known as polynyas associated with offshore winds.

“We may have more experience flying science missions around the world with UAS than any other research group in the world,” Frew said. The final six site selections by the FAA are expected in December, he said.

One advantage for the Colorado coalition seeking one of the six FAA test sites is the diversity of geography in the state, ranging from the Great Plains to large, extremely high mountainous areas, which would facilitate testing and deployment of UAS, Argrow said. Another advantage is the quality of CU-Boulder’s graduate level aerospace engineering sciences program, ranked second in the nation by the National Research Council, an arm of the National Academy of Sciences.

Argrow said there is a lot of public misinformation floating around about the uses of unmanned aircraft, spurred in part by the use of so-called military “drones” in places like Afghanistan and Pakistan. “Our UAS are specifically used for science and engineering activities,” he said. “We are not flying these aircraft to peek in windows. Our interests lie in tackling some of the biggest science issues today, which include better understanding severe weather and climate change, often in remote places where it is impossible or cost prohibitive to gather data using other methods.”

In 2009 and again in 2010, researchers from CU-Boulder participated in a multi-agency university project known as VORTEX2, which had a goal of learning more about the origins, structure and evolution of tornadoes to improve both the time and accuracy of tornado forecasting. In the spring of 2010 a CU tornado-chasing team using a small UAS from the RECUV center intercepted “supercell” thunderstorms, some that produced tornadoes, in eastern Colorado and western Nebraska, Argrow said.

Argrow said the CU team worked closely with the FAA to secure particular blocks of airspace measuring roughly 400 square miles known as a “box” in Colorado, Nebraska and Kansas for use in flying the UAS into severe thunderstorms. While the FAA was initially very conservative in allotting CU both airspace and airtime, the CU faculty and student storm chasers eventually gained access to 59 boxes in the three states and were required to give the FAA just two hours of notice prior to each flight.

Frew and Argrow said developing instruments and unmanned aircraft requires multidisciplinary approaches -- combining aspects of both aerospace and computer science, for example -- which has led to a new model of education in CU-Boulder’s engineering college.  While it used to be standard to have a single faculty adviser for multiple students, the breadth of information required for designing, developing and flying UAS with sophisticated sensors now may include multiple faculty advisers from different departments for a single student.

CU-Boulder Research Professor James Maslanik of aerospace engineering has been involved in a number of UAS science projects in Earth’s cold regions. In addition to participating in unmanned science flights in Antarctica, Greenland and Svalbard -- Norway’s Arctic archipelago -- assessing changes in sea ice, Maslanik is the principal investigator on a $3 million, NASA-funded study known as the Marginal Ice Zone Observations and Processes EXperiment, or MIZOPEX, that is measuring sea-ice declines north of Alaska.

“We are looking for the physical drivers that explain why the Arctic sea ice isn’t recovering in the Beaufort Sea and the adjacent Canada Basin,” Maslanik said.  “The ice has been melting out relatively early and forming late, leaving much bigger expanses of open water.  We have several different classes of UAS we will be using, and we are exploring what kinds of science we can do with each.”

In an effort to learn more about ocean surface and subsurface conditions in remote areas like the Beaufort Sea, CU-Boulder aerospace engineering faculty members Scott Palo and Dale Lawrence and a team of graduate students are developing expendable UAS that can fly to specific destinations and be put to work as floating buoys to gather data. Sporting strings of instruments dangling in the water, the modified “dropsondes” can provide valuable information on ocean temperatures and chemistry that may hold some answers about changes and trends in sea ice concentrations as the climate warms.

“We have developed a center here with world-class expertise,” Frew said of RECUV. “Our students are being trained to design, build and fly a variety of sophisticated UAS, which will make them a valuable commodity in the workforce in the coming years.”

RECUV, which draws faculty and students from across the College of Engineering and Applied Science, is a university, government and industry partnership dedicated to the development and application of unmanned vehicle systems. The center research encompasses scientific experiments, commercial applications, mitigation of natural and man-made disasters, security and national defense.