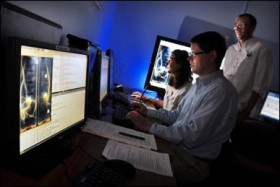 Space-faring explorers may be able to surf the Web while scouting the moon and Mars if a new technology aimed at extending the Internet across the solar system reaches its fullest potential.

The University of Colorado at Boulder is working with NASA to develop "disruption tolerant networking," or DTN, which will extend Earth's Internet into outer space and across the solar system, according to researchers.

Scientists are testing the new communications technology on the International Space Station, and DTN is expected to lead to a working "Interplanetary Internet," said Kevin Gifford, a senior research associate at CU-Boulder's BioServe Space Technologies and a faculty member in the aerospace engineering sciences department.

Gifford said traditional communication between spacecraft and ground stations has been over a single point-to-point link, much like a walkie-talkie.

"Highly automated future communications capabilities will be required for lunar habitation and surface exploration that include passing information between orbiting relay satellites, lunar and planetary habitats and astronauts on the surface," he said.

Researchers refer to DTN messages as "bundles." NASA began a communication operations test on June 15, sending bundles from the space station to its operations and control facility at Marshall Space Flight Center in Huntsville, Ala., then on to a mission control center at CU-Boulder's BioServe.

The Internet Research Task Force developed the new DTN bundle protocol based on initial work started more than 10 years ago in a partnership between NASA and Vint Cerf, who holds the title of vice president and chief Internet evangelist of Google Inc. of Mountain View, Calif., and often is referred to as one of the "fathers" of the Internet.