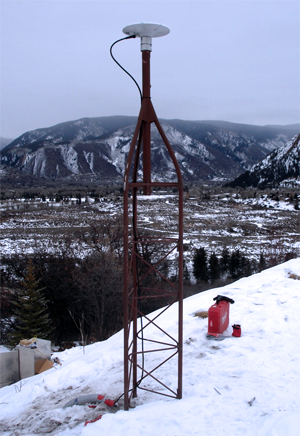 A University of Colorado Boulder professor who developed a clever method to measure snow depth using GPS signals is collaborating with Western Slope officials to make the data freely available to a variety of users on a daily basis.

CU-Boulder aerospace engineering sciences professor Kristine Larson and her colleagues discovered in 2009 that GPS signals that bounce off Earth’s surface before hitting the receivers, once considered bothersome “noise,” could be used to measure snow depth, soil moisture and even vegetation moisture. Larson also is a pioneer in the field of using GPS signals to chart minute plate tectonic and volcanic movements over time around the world.

In January, as part of a New Year’s resolution, Larson contacted the Mesa County Surveyor’s Office in Grand Junction, which has a sophisticated network of 23 stationary GPS reference stations, or receivers, both in and around Mesa County. The spider web-like network stretches from Aspen west to Moab, Utah, and from Durango north to Craig.

While the Mesa County GPS system is used for everything from capital improvements like road and bridge building to boundary line measurements and even some criminal cases -- including homicides -- the new snowpack information Larson has been teasing out of the data should be of interest to water resource managers, farmers, atmospheric scientists and others, she believes.

“I knew that most surveyors use the exact same equipment I do, and I looked at this as a chance to help out water managers, farmers and others on the Western Slope interested in information like spring runoff and crop moisture,” she said. “I’m certainly not the only one measuring snow depth in Colorado, but now we have some free, extra data that can help experts not only assess potential flooding events but also anticipate possible water restrictions in years of low moisture.”

Originally developed in the 1970s for military use, GPS technology is in wide use today, telling drivers and hikers their exact position on the planet and providing directions to their destinations by gathering signals simultaneously from the 31 operating GPS satellites now orbiting Earth. The current GPS system in Mesa County is accurate to less than 1 centimeter -- about the width of a dime -- over several hundred miles.

“When Kristine contacted me to see if I would make our GPS data available to her, it was a no-brainer,” said Kochevar. “I’m always interested in new ways to use this technology.”

What Larson needed was signal strength data that had bounced off the snow before arriving at the GPS receivers at the various Mesa County-administered stations, so called “multipath” data normally tagged as “late” and generally ignored by GPS surveyors and engineers.

Kochevar said it took him just minutes to change the logging strategy of the Mesa County GPS system. He began making the new data available to Larson daily.

Kochevar has been traveling to other cities and counties in Colorado and Utah since the 1990s to give GPS demonstrations that show the benefits of having a full-time stationary reference network. He developed memorandums of understanding with administrators of various counties and cities, who realized that having a stationary GPS receiver of their own could markedly improve their engineering data.

“The people in Mesa County have been nothing but helpful to me,” said Larson.  “And we both put our data out there for the public good, so people can better do their jobs.” Larson posts her snow depth data daily from roughly 10 Mesa County stations in Colorado.

“I admit I was a little surprised when I learned that Kristine and her colleagues had come up with a novel way to use these multipath GPS signals,” Kochevar said. “I don’t think there are too many people out there yet who understand the advantage they can gain from using the type of data she is generating.”

Kochevar said he believes the data would likely be valuable to local and state government agencies interested in water storage, especially in the Colorado and Gunnison River basins.

Larson also is working with data collected by UNAVCO, a National Science Foundation- and NASA-sponsored facility located in Boulder. UNAVCO operates the EarthScope Plate Boundary Observatory, or PBO, a network of roughly 1,100 GPS receivers in the western United States.

UNAVCO not only sets up GPS stations around the West, it also installs supporting equipment like seismometers and strain meters to monitor the constant movements of the colliding Pacific and North American tectonic plates. A number of UNAVCO instruments are in place along the San Andreas Fault in California.  Others in Yellowstone National Park straddling Wyoming and Montana are doing double duty of sorts. They are measuring both “ground inflation” caused by magma movements of the enormous but dormant Yellowstone volcanic system as well as charting daily snow depth and changes in the moisture of vegetation and soil.

In 2012 Larson and CU-Boulder Assistant Professor Eric Small of the geological sciences department received $500,000 in research award money from both NASA and NSF to use data from about 400 PBO GPS receivers to measure snowpack, soil moisture and vegetation. Larson also is gathering GPS data from the Minnesota Department of Transportation using the PBO system, monitoring melting snow and heavy rains that can make the region prone to severe flooding in the spring.

Last year, Larson even developed a method to assess the density of volcanic plumes using GPS, a valuable data set for airline companies and the military whose aircraft safety potentially could be compromised by such particle-filled plumes.

Larson said she plans to continue working with the Mesa County Public Works Department because it is a win-win situation. Kochevar said Mesa County is pleased with the collaboration, and says its growing GPS network that is now providing a new kind of data at no cost to Coloradans may help mitigate natural resource challenges.

“This is my baby,” Kochevar said. “I live for this network.”

Tagged with:
CU For Colorado, research