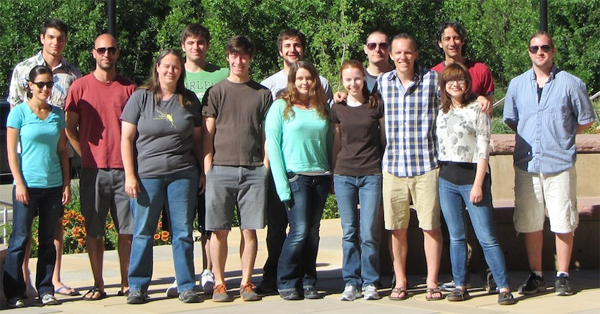 When this year’s iGEM team at the University of Colorado Boulder began meeting early this year, they wanted to take what they knew about biology and use it to build something new. iGEM, or International Genetically Engineered Machine, is the top synthetic biology competition in the world; after a foundation-building first year, the CU-Boulder team wanted to make an impact in 2013.

Some 30 CU undergraduate and graduate students from a wide range of science and engineering departments worked together to design the project “DIY Synthetic Biology,” taking apart and reconstructing lab techniques and tools and improving them. Over the summer, six students completed the project. These students then boarded a plane to Montreal, Canada, with their faculty mentor, practiced their presentation until 2 a.m., and competed with 52 North American teams, earning an iGEM special award and their place in the upcoming iGEM World Competition in Boston in November.

“There probably aren’t many people in North America who get pumped up about new methods of low-cost enzyme purification or hacking miniprep columns,” says MCDB graduate student and iGEM team leader Joe Rokicki. “But the attendees at the regional competition were riveted. Now our next challenge is figuring how we are going to get to Boston.”

The judges were so riveted that the team was awarded the “Best New BioBrick Part or Device, Engineered” for cloning and characterization of a protein tag that reversibly precipitates in the presence of calcium. The BioBrick award for a part or device is only given to one team at the North American regional competition.

“There were a lot of proposals in the competition, but CU delivered an actual product,” says CU iGEM team mentor Robin Dowell, who is an assistant professor in Molecular, Cellular and Developmental Biology and a faculty member at the BioFrontiers Institute. “The team used a lot of ingenuity – slick lab techniques that make it cheaper and easier to conduct important research. They really gave the judges a lot to talk about.”

iGEM, which began in 2003, provides each team with a kit of biological parts – like promoters or specific genes – from the Registry of Standard Biological Parts at the beginning of each summer. Students then use these parts, or parts of their own design, in their projects.  iGEM’s regional competitions are held in North America, Latin America and Asia.  The CU-Boulder team is one of 50 teams from around the world to qualify for the world competition Nov. 2-4.

“I couldn’t be more proud of this team,” says BioFrontiers Institute Director Tom Cech. “They earned their place in the world competition, but they also learned a lot of valuable lab and life experience. We will all be rooting for them in November.”