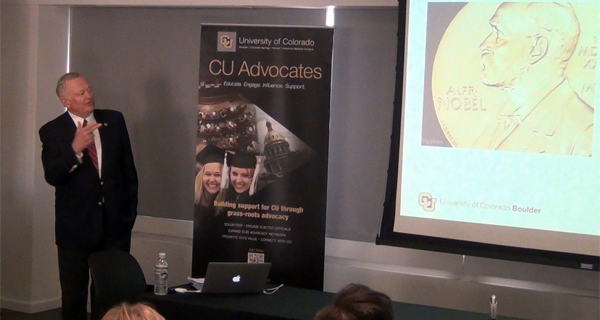 Only 846 individuals have been honored with the Nobel Prize in its 112-year history, and the University of Colorado is proud to claim five of them.

About 40 members of the CU Advocates program learned more about those prized faculty from Stein Sture, CU-Boulder’s vice chancellor of research, during a lunch presentation last week at 1800 Grant St., Denver.

“They’re our pride and joy, good heavens,” Sture told the audience. “Our first Nobel Laureate (Thomas Cech) came to us in 1989 and we were pleasantly astounded – pleasantly shocked.”

Nobel Prizes are awarded annually to people – individuals, teams or organizations – whose work is deemed to have “conferred the greatest benefit to mankind.” Four of CU’s Nobel Laureates earned their prizes for work in physics: David J. Wineland, 2012; John Hall, 2005; and Eric Cornell and Carl Wieman, 2001.

“Once you have (a Nobel Prize), your university ranking takes a jump up,” Sture said. He referred to the current Leiden Ranking that places CU-Boulder at No. 14 among 500 major universities worldwide, based on scientific performance. “That’s pretty darn good.”

Cech won in 1989 for his work in chemistry, specifically the discovery of catalytic properties of RNA.

“He was home-grown,” Sture said of the Distinguished Professor of Chemistry and director of the CU BioFrontiers Institute. “He taught freshman classes. He had been a National Academy of Sciences member, but … being a Nobel Laureate is something extraordinary.”

Cech came to CU as a “trailing spouse,” joining his wife, Carol, on the faculty. “Then all of a sudden he floated up,” Sture said. “I recall we were all astounded (by the Nobel). When the news came, we were overjoyed.”

At the time, Sture said, the feeling was that CU was lucky to have a single Nobel Laureate. Yet Cornell and Wieman earned their own Nobel Prizes just 12 years later.

Sture noted that all five of CU’s Nobel Laureates arrived at the university early in their careers, and all took part in both research and teaching.

“They’re all very different personalities,” he said. “They’re also their own advocates: They help all of us promote the university.”

CU’s tally of five could have been greater, Sture said. In the ‘80s, three faculty members who left CU went on to win Nobel Prizes at their next universities, all within a couple of years after departing.

The free Nov. 7 event was the latest Lunch and Learn event presented by the CU Advocates program, based in the Office of the President. Volunteer members of the CU Advocates – including faculty, staff, students and alumni – gather knowledge at events like this in order to be better advocates for the university. To sign up for CU Advocates click here.