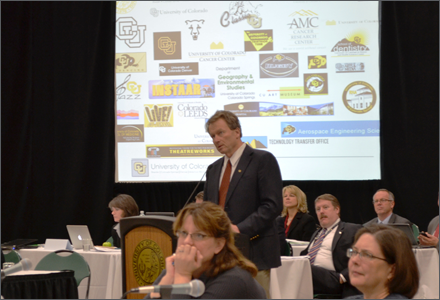 Displaying one of many slides filled with former university logos, Vice President for Communication Ken McConnellogue discusses progress made in university branding the past year. (Photo by Cathy Beuten/University of Colorado)

The university’s brand isn’t a logo or a slogan. It’s the feelings and perceptions our constituents have about the University of Colorado as part of their recognition of and interaction with us. Consistency is critical to building that recognition and the university’s brand. One year ago, the University of Colorado embarked on a path to enforce a consistent, unified message, releasing universal brand standards for the system, foundation and four campuses.

Vice President of University Communication Ken McConnellogue briefed the Board of Regents on the progress made implementing the CU brand. “The university has made better than anticipated progress in branding implementation,” he said. “We have a high level of compliance across the CU system.”

Prior to the branding effort, CU suffered an identity crisis. Hundreds of competing messages and visual images represented the university, confusing audiences and creating an inefficient and ineffective use of resources, he said.

At the one-year marker:

Regents questioned the stricter use of the athletic marks, CU-Boulder’s Ralphie and the UCCS mountain lion. Regent Michael Carrigan said he did not see the purpose of limiting the use of CU’s buffalo, such as on food worker employees’ apparel. “My concern is specific to Ralphie and how valuable that mark is,” he said. “I think we’re diminishing it by determining who can wear it and who can’t.”

McConnellogue and CU-Boulder Vice Chancellor for Strategic Relations Frances Draper explained using the athletic logos only for spirit reasons, such as competitions, is in line with standards at other institutions. Allowing unstructured use “dilutes the licensing value for this particular mark,” McConnellogue said.

Regent Stephen Ludwig and President Bruce Benson pointed out that no major organization – such as IBM, Exxon or Nike – allows unlimited use of its logo. “We are a $2.8 billion enterprise that has invested a lot of money in branding,” Ludwig said. “The amount of money we’ve invested, the industry standards and the research we’ve invested on branding is all proof this is the proper approach.”

The brand standards are enforced by the university Brand Identity Standards Board, which determines appropriate usage, addresses common issues such as signage, co-branding.

That isn’t to say there’s no flexibility. “We’re cognizant of fact that each campus has its own character,” McConnellogue said. “We’re listening to our constituents and we’re hearing the midcourse corrections we need to make.

“This is an ongoing process,” he said. “We have to have our leadership enforce to our CU communities that this is important; we’ve made progress but we have a ways to go.”