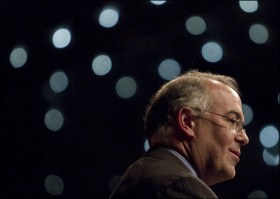 Photo courtesy of Armes PhotographyNew York Times columnist David Brooks speaks at a School of Public Affairsevent on Wednesday, May 12.

New York Times columnist David Brooks wowed a packed house at the Seawell Ballroom on Wednesday, May 12, for the School of Public Affairs (SPA) Investment in Excellence dinner. But before he launched into his 45-minute presentation of political insights, sharp observations and rich humorous asides, he expressed genuine admiration for the SPA students he met that afternoon.

"The students were really, truly impressive. Really, really impressive," he said. "They are clearly going to go on to great things."

About 40 students met in an informal question-and-answer session with Brooks that offered a preview of some of the comments he made later in his formal remarks.

Brooks said he has known President Barack Obama for many years and "personally I've never been disappointed with the way he's conducted himself." He called him "a very perceptive guy" and a "genuinely nice person" with a "calmness" about him. He complimented the culture of debate he has cultivated in the White House and the range of opinions Obama considers as part of his decision-making process. "I have trouble thinking of any other elected official I'd like to see as president right now."

That being said, he offered his view that the president is "trying to do too much too soon" and is "spending too much money."

The president has "an addiction to the home run," Brooks said. "He always wants to swing for the home run." As a self-described Mets fan, Brooks said, "I'm big for hitting singles."

He also cited the flip side of Obama's "intellectual self-confidence. He has a lack of emotional connection to where the country is," he said. "They came into office thinking the country was ready for a new deal, but this was a country ... that was extremely anxious about insecurity and disorder and the recession, and they added to that anxiety and insecurity by piling on a whole nother set of changes. They've created a backlash against them."

As a result, Brooks predicted, Democrats will lose the majority of the House of Representatives and probably eight Senate seats.

Brooks joked about politicians, saying they are "emotional freaks" and "talk so much they drive themselves insane." Still, he said, after years of covering campaigns and congressional sessions and watching various administrations closely, "I'm convinced that the people who go into this line of work do it because they really care."

The message was warmly received by a crowd that was dominated by civic leaders and political hopefuls.

Chancellor M. Roy Wilson closed the evening saying, "The School of Public Affairs is a gift to the entire state of Colorado."

Send your thoughts and suggestions for the Newsletter.
END_OF_DOCUMENT_TOKEN_TO_BE_REPLACED