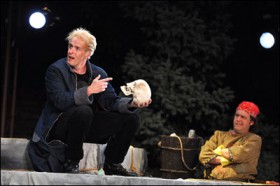 The Colorado Shakespeare Festival, one of the nation's most well-respected theater events, has opened its 52nd summer season at the University of Colorado at Boulder's Mary Rippon Outdoor Theatre.

This year's productions include "Hamlet," "Much Ado About Nothing," "The Two Gentlemen of Verona," "The Complete Works of William Shakespeare, Abridged," and "To Kill a Mockingbird."

The festival is staging the plays at the Mary Rippon Outdoor Theatre and at the University Theatre Mainstage, an indoor venue on the CU-Boulder campus. For more information about performance times, locations and ticket prices, visit www.coloradoshakes.org.

Each year, the festival mounts Shakespearean and other classic theater productions, along with plays representing the work of playwrights and novelists from the United States and other parts of the globe. This year, the festival will stage "To Kill a Mockingbird," based on Harper Lee's 1960 modern American classic and Pulitzer Prize-winning novel.

The beloved Southern novel is set in the fictional town of Maycomb, Ala., during the Great Depression. Six-year-old Scout Finch narrates the story, describing a cast of characters that include her father, Atticus, an attorney who defends a black man accused of raping a white woman. The novel famously portrays the social mores and harsh color line that existed in the South at the time.

This year's theater season is shorter than previous years, and festival organizers hope to draw as many CU faculty members, staff, students and alumni to performances as possible. Anyone who has attended performances at Mary Rippon knows "what a lovely experience the festival is on summer eves," said CSF spokeswoman Mell McDonnell.

Since its 1958 inception, the Colorado Shakespeare Festival has staged "Hamlet" seven times, the last under the direction of James M. Symons in 2003. Festival organizers said legends about CSF productions of "Hamlet" abound. In 1988, actor Val Kilmer played the lead role in the stage production, and campus police reportedly had to be called when adoring teenage fans showed up before and after the play.

"Hamlet" tells the story of a prince who returns home from college to attend his father's funeral to find that his mother has married his uncle. The play has produced some of the most memorable lines in theater history, including "Something is rotten in the state of Denmark," and culminates in what some consider one of the greatest duels in all of literature.