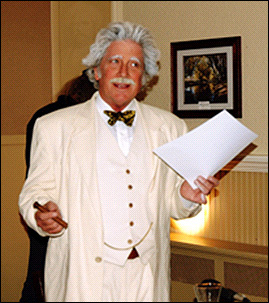 In his signature white suit to match the wild, white tuft of hair, Mark Twain (aka Hugh Bingham) started off the panel discussion gruffly, decrying the Colorado state ordinance prohibiting him from smoking his cigar.

"I cannot speak without cigar in hand," he said brusquely. "I shall work to get the ordinance removed." A standing-room-only crowd at the Denver Press Club cheered, whether in agreement, for the impersonator or both.

As club staff scrambled to set up more chairs for the larger-than-expected turnout on March 3, Stan Soocher, associate professor in the department of music and entertainment industry studies, moderated a panel composed of Bingham; Denver Post columnist William Porter; Bob Baron, owner of Fulcrum Publishing in Golden; and Philip Joseph, associate professor of English. The event was sponsored by the Denver Press Club and CU Denver's College of Arts and Media.

Soocher first read a letter sent to Twain by the Denver Press Club asking the author for a signed photo so patrons could look upon his cheerful face. Twain's handwritten response was, "Write on it: Mark Twain, Dean of the planet's journalism: joined the guild in 1849, aged 14, and has not broken the connection in 58 years."

Panelists outlined Twainâ€˜s life, from working in a print shop, to being river boat pilot to working in the mines.

"I was not a very good miner," Twain (Bingham) chimed into the conversation. "I did not like to work that hard."

"Twain was arguably the most influential storyteller in America," Joseph told the crowd. "His understanding of words as communication; his understanding of writing as a trade; his relationship to words as motivation ... he put pieces of himself in his world of letters."

One of Twain's main motivations, however, was money.

"If Mark Twain were Carmelo Anthony, he would have signed the contract," Joseph said.

Panelists spoke fondly of Samuel Clemens as he transitioned into Mark Twain and transformed American literature.

"Twain parlayed his natural observation and keen wit into his writing," said Baron, noting Twain was the first to compose works in the American vernacular.

A humorist, perfectionist and sensationalist who made up and printed stories as if truth (vaguely correcting them days later with a simple "I take it back"), Twain embodied the spirit of the country and – as was witnessed by the turnout at the press club – is arguably the most beloved American author of all time.

"He taught us who we were as a people and where we came from," Porter said.

Send your thoughts and suggestions for the Newsletter.
END_OF_DOCUMENT_TOKEN_TO_BE_REPLACED