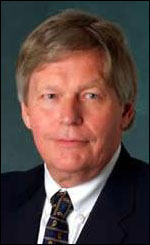 A strong interdisciplinary strategy has helped graduate students in the space sciences to realize their potential, according to Daniel N. Baker, director of the Laboratory for Atmospheric and Space Physics (LASP) at CU-Boulder. The results of this "systems" method, as opposed to the familiar discrete, departmental approach to graduate training, has been rewarding.

"I had viewed the work of graduate students in a traditional way," said Baker, who came to Boulder in 1994 from the NASA Goddard Space Flight Center. "They would work with me in a limited domain, one student and one adviser. But Boulder is a rich environment — there is not only the university with its traditional departments, but our multiplicity of interdisciplinary space sciences units, as well as the National Oceanic and Atmospheric Administration (NOAA) and the National Center of Atmospheric Research (NCAR) that have extremely gifted scientists."

Baker has been awarded the Distinguished Research Lectureship and will speak at 3 p.m. Friday, April 16, in Math 100 on the Boulder campus. A reception will follow. His lecture, "MESSENGER to Mercury: Exploring the Sun's Nearest Neighbor" will examine the most extreme solar driving forces of a planet in our midst. LASP will host public tours before the lecture.

Baker said the most interesting things happening in science are taking place at the interfaces between different disciplines, and scientists working at these junctures are making the most revolutionary discoveries where future opportunities will arise.

"I have strived throughout my career to work through and across disciplines," he said. "We as a university should leapfrog traditional disciplines and make Boulder 'a mountain in the flat world of Thomas Friedman' recognizing the internationality of science."

It became obvious to Baker in the early 2000s that the space sciences departments should take advantage of Boulder's large, talented scientific community.

"I believed that graduate students should become part of this richer climate, and that we could engage as co-advisers the leading scientists of NOAA and NCAR," he said. "So this has been the hallmark of recent times — if my students can find opportunities at these research labs, I encourage them to take part in this broader community of scientists."

Baker described the experience of one of his students, James McCullough of the department of physics. McCullough is completing his doctorate this semester. He arrived at CU-Boulder initially to study condensed matter physics. He then moved to using magnetic field models established by other scientists and became engaged in using numerical models to successfully explain some puzzling space observations. In the process, McCullough became one of the leading experts in wave-particle interaction. He will continue this research with the Air Force Research Laboratory in Albuquerque, N.M.

McCullough's work in the larger scientific community summarizes what Baker has described as "Boulder's tapestry of opportunities limited only by imagination."

"It's interesting that a young scientist comes here, gets involved in a summer data research analysis just to see what's going on, quickly becomes a central linchpin in a research group and moves to the forefront in the world in how complex numerical models can be used," he said.

What advice would Baker offer to incoming graduate students? "Learn the basics, apply yourself, look at all the people and resources we have, and you can make the next several years of your life very rewarding," he said. "I hope I imbue students with a strong sense of optimism, enthusiasm, willingness to work hard, dedication and a sense of adventure whether they go into academia, industry or the government labs, and that the light goes on — that the student says, 'Ah, that's what you meant, that's the ticket to happiness and success.'"