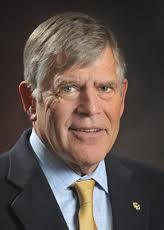 CU Denver l Anschutz Medical Campus Interim Chancellor Don Elliman’s title is a little shorter after the CU Board of Regents voted Wednesday to waive the chancellor search. The move paved the way for CU President Bruce D. Benson to remove the “interim” from Elliman’s title and appoint him chancellor.

The regents unanimously approved waiving the chancellor search and complimented Elliman on his work at the university the past year.

“You have added a great deal of wisdom and valuable insights to the university and I appreciate you dedicating your time and talent to the university,” Chair Michael Carrigan told Elliman. “And we’re glad we don’t have to spend as high as $100,000 on the search.”

Benson thanked the board for waiving the search, then immediately appointed Elliman as chancellor of the University of Colorado Denver | Anschutz Medical Campus.

Benson had conducted a series of campus forums earlier this month, speaking to nine governance groups and key campus constituents on the CU Denver downtown campus and Anschutz Medical Campus about making Elliman the permanent chancellor.

“There were no negative comments about Don Elliman,” Benson said.

Said Elliman, “I am thrilled to have the opportunity. It’s an honor to be associated with the University of Colorado and the CU campuses. I wake up in the morning excited about going to work. . . . I can’t think of another job I would rather have.”

Elliman was chosen interim chancellor last February after Interim Chancellor Jerry Wartgow announced his retirement. Elliman has filled such high-profile positions as the state's chief operating officer, director of the Office of Economic Development and executive director of the Charles C. Gates Center for Regenerative Medicine and Stem Cell Biology at the CU Anschutz Medical Campus. Additionally, he had a 30-year career in publishing with Time Inc. (serving as president of Sports Illustrated and publisher of People) and was president of Ascent Sports, then-owner of the Denver Nuggets, Colorado Avalanche and Pepsi Center.

In other action on Wednesday, the first day of a two-day board meeting at UCCS:

Jay Dedrick contributed to this report.

Tagged with:
Board of Regents, Bruce Benson, Elliman