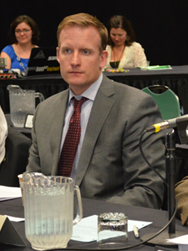 Matt Gianneschi at the June 2012 CU Board of Regents meeting.

Matt Gianneschi spoke to the University of Colorado Faculty Council during its Sept. 27 meeting at system administration offices in Denver.

“The purpose (of metrics) is not for us to say, ‘We’re out to get you,’” Gianneschi said while addressing questions from council members. “It’s that we know we can improve certain areas – so how can we do that and present it to legislators in a way that they’ll understand this is good for the system?”

The master plan’s four general goals call for the state’s higher education institutions to increase college completion, improve student success, boost access to better reflect state demographics and work with the CCHE to identify revenue that could reduce the student debt load. How those goals are measured, and the ramifications of measurement, are what concern many faculty members.

Jerry Peterson, chair of the Boulder Faculty Assembly, called the idea of an open-ended requirement to increase the graduation rate “dangerous” because the rate cannot mathematically rise forever. Gianneschi said he agreed that such a measure applied ad infinitum was not attainable, but called the master plan “a five-year contract. We’re not talking about 100 years. … We’re looking for immediate progress, not for a fixed number.”

David Port, chair of the Anschutz Medical Campus Faculty Assembly, said the plan’s stipulations “carry the danger of being overly simplistic. When you have metrics that can apply to a broad group, you’re in danger of making things too generic.” He said metrics should be partitioned for various institutions.

Gianneschi said the commission has attempted just that in the latest version of the plan.

“Not each institution is going to be subject to the same metrics,” he said. “I can find differences in your system. UCCS has one of the most successful transfer programs in the state. That’s one where we can say, ‘Hey, let’s give you credit for something done well.’ At Boulder, the transfer rate may not be a big issue, but maybe the graduate program is.”

Pam Laird of CU Denver said she appreciates the “gentle guidance and encouragement” of the commission’s goals.

“My concern is that instead of framing it as encouragement – ‘If you do the following, then you will be rewarded’ – the framing is more of a punitive nature. … I’m worried that if there’s any failure to perform to these standards – which we all want to do – that by setting up these metrics, it creates targets (for cuts).”

Noting that he was raised by parents who were college faculty, Gianneschi said he is sympathetic to such concerns, but that higher education in the state must grapple with public perception and its connection to state funding.

“Let me be pessimistic with you: We would be kidding ourselves if we think the public believes what we are doing is all very positive,” he said. “There’s a lack of awareness of the black box of the university system: They see money go in, students go in, other students come out. Most voters in Colorado did not go to college here.”

While the CCHE is specifying the metrics, Gianneschi said institutions will be allowed to choose a metric of their own in each of the four goals.

Governing boards of higher education institutions across the state last week were sent letters with the metrics outlined. The commission has requested responses by Oct. 26; the finished performance contracts are due in December.

Send your thoughts and suggestions for the Newsletter.
END_OF_DOCUMENT_TOKEN_TO_BE_REPLACED