The University of Colorado's chief diversity officers, campus chancellors and President Bruce D. Benson will work together to increase the focus on the university's efforts to recruit and retain students from diverse ethnic, racial and socioeconomic backgrounds. The collaboration is part of the ongoing restructuring of system administration offices announced in May.

Carmen Williams, assistant vice president for diversity, said system administration will phase out her position, sending more diversity initiatives to the campuses, including K-12 outreach and student recruitment programs previously administered by the president's office. Williams, who has served in her position since 2004, will retire in December.

"Diversity is one of my top priorities, and I'm focused on ensuring a successful transition to our new model," Benson said.

The group expects to deliver a proposal to the president in the fall, detailing recommendations for a seamless transition. All agree that the restructuring plan will create greater opportunities for them to share knowledge, collaborate with one another in more creative ways and bring about positive change across the CU system. Even so, Williams and her campus counterparts believe the president and the university as a whole must continue to embrace diversity as an institutional value.

Under the new model, the president will meet regularly with both chancellors and chief diversity officers.

"It will be important for the president to continue to take his message of his commitment to diversity to Colorado communities, but also have that cemented in action," Williams said. "Part of that will be maintaining some kind of diversity function at the system level."

The group's transition plan will likely include a recommendation that the president maintain the annual President's Diversity Awards, which recognizes academic and administrative departments, faculty, staff and students who go the extra mile to create inclusive campus climates for all students. Campus diversity officers also want to ensure the president will maintain a $150,000 initiative fund to supplement campus efforts to recruit more Latinos, African Americans, American Indians and Asian Americans, Williams said. 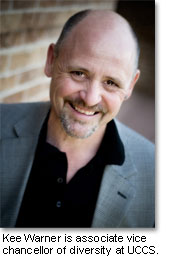 Kee Warner, associate vice chancellor for diversity at UCCS, said although the campuses have unique missions, diversity officers share common goals that enable them to work together on behalf of the entire CU system.

"Each campus has its own place in the puzzle, and I think we're also very aware we're not just concerned with the University of Colorado. We have to work with other institutions such as community colleges and K-12 systems. We're not just going to retreat to our campuses," said Warner, a Colorado native who has taught sociology at UCCS since 1993.

"And, certainly, we need the support of the president's office and the regents for the kind of work we are doing. In terms of student recruitment and success and really reaching out to the populations in our state that aren't engaged in higher education-it's a long-term challenge," he said. "We have a lot of allies. They may not be the loudest political voices, but there are a lot of folks out there who recognize we have to educate our young people."

Sallye McKee, vice chancellor for diversity, equity and community engagement at CU-Boulder, said regular meetings with her counterparts on the other two campuses would provide them with "grand opportunities to coordinate our diversity practices, goals and outcomes."

"I really look forward to working with both Zen and Kee, and I think coordination will help us meet state goals. We can look at creative ways of ensuring that more Coloradans have more access and success around diversity, inclusiveness and excellence," she said.

Zen Camacho, vice provost and assistant vice chancellor for diversity and inclusion at UC Denver, is confident that the president's restructuring plan will spur greater creativity and collaboration among the diversity officers. Camacho, Warner and McKee have been meeting with Williams on a regular basis, and plan to build on the alliances they have forged. They are already sharing information with each other about highly qualified faculty of color candidates, and identifying students who might perform better in a program on another campus. 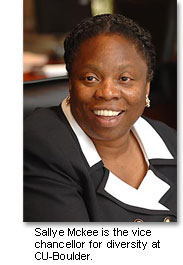 "I see a lot of good things in this," Camacho said. "The president has to continue to be a strong advocate and impress on the entire system that diversity is a high priority, much like the chancellors do on each of the campuses."

Camacho faces many of the same student and faculty recruitment and retention issues as his counterparts in Boulder and Colorado Springs. A major challenge at his large, urban downtown Denver campus is the difficulty of keeping first-generation, low-income students in school despite financial difficulties and other family crises.

About 39 percent of students on the UC Denver Downtown Campus are first generation scholars, and more than 25 percent are Pell eligible. Breaking the cycle of multigenerational poverty can be difficult when students struggle to catch up with peers who attended better schools and have to worry less about money and health care.

"Graduation rates among students of color lag behind the total, and it's attributable to their living circumstances. They are already in a fragile existence. When somebody loses a job or somebody's mother becomes ill, it really affects their ability to continue," Camacho said.

At the UC Denver Anschutz Medical Campus in Aurora, the university's health care schools-dental medicine, medicine, nursing, pharmacy and the graduate school-struggle with one of the greatest challenges in all of academe: How to recruit faculty of color when the private sector often offers clinical researchers more lucrative professional opportunities.

Despite the statistics remaining steady, Williams said the university has made some strides in recruiting and retaining talented students and faculty of color over the past five years. In fall 2008, all three campuses reported their largest and most diverse freshman classes ever.

In addition, the university has responded to public calls to broaden its definition of "diversity" to encompass intellectual, geographic, gender, religious, socioeconomic, generational and sexual orientation diversity.

A key piece of the university's success in recruiting and retaining first-generation and students of color has been retention programs that match students with peer, staff and faculty advisers from similar backgrounds. Williams said mentors play a crucial role in helping undergraduate students stay focused and feel welcome on large campuses that can make scholars of any background feel anonymous, overwhelmed and homesick.

"They really are instrumental in the persistence of many students of color," she said. "They are incredibly powerful sources of support."

CU is on a roll with diversity efforts, she said. "And I attribute that entirely on the chief diversity officers who have been hired. They are phenomenal."

To learn more about diversity initiatives at the University of Colorado and the university's chief diversity officers, visit https://www.cu.edu/diversity/.