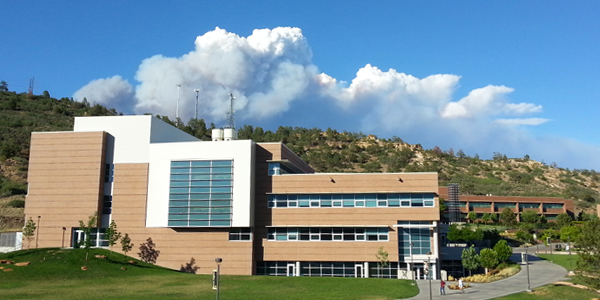 Smoke from the Black Forest Fire was visible from campus.

With efforts ranging from personal help to those who lost homes to serving as a community evacuation site, UCCS was a community resource during the June 11 Black Forest Fire.

In contrast, the Black Forest Fire did not substantially interrupt campus activities.

The smell of smoke was evident but air quality and visibility were never serious problems. And while the Campus Recreation Center became designated Red Cross shelter, it never housed more than 10 individuals. Another eight families connected with campus stayed in residence halls. Media briefings during the fire were conducted at Pikes Peak Community College’s Rampart Range Campus.

UCCS police officers assisted with traffic control at the Black Forest Fire, an important component to reducing looting in the area or as El Paso County Sheriff Terry Maketa called it “the revictimization” of those evacuated. Both Maketa and Col National Guard Lt. Col. Lt. Col. Mitch Utterback cited the efforts of UCCS Police in daily press briefings.

UCCS was better prepared. As the fire raged, Szpyrka quickly assembled a team of staff members to prepare campus and, specifically, housing, for evacuees. For some, including Ralph Giese, director, Office of Residence Life and Housing, the efforts were déjà vu.

“Seeing our community burn two summers in a row breaks your heart,” Giese said. “I am so proud to be part of UCCS and the greater Colorado Springs community; it is an honor to provide a temporary, safe home away from home for our family members.” 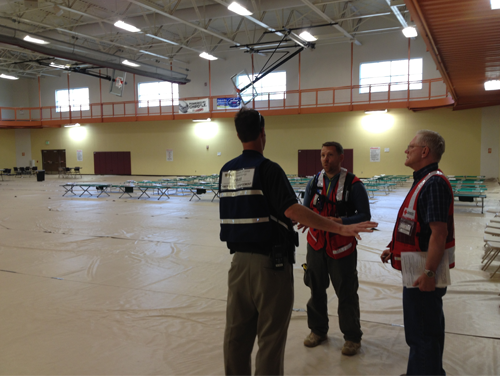 Tim Stoecklein met with Red Cross officials about converting a court into a evacuation shelter.

Stoecklein worked closely with Red Cross officials and Campus Recreation Center staff to turn a gym into a shelter. Other staff in the Department of Emergency Management began to compile names of UCCS community members interested in helping. More than 60 volunteered for jobs ranging from sheltering pets to preparing rooms. Regular updates were sent to faculty, staff and students and questions answered via social media.

“By applying lessons learned from last year’s fire, increased cross-training and collaboration with our city, county and state partners, and continued planning and exercise of our campus responses to all hazards, we felt our campus was better prepared to respond in the capacities needed to support the community response during the Black Forest fire,” Stoecklein said.

In another lesson from the Waldo Canyon fire, university officials know that the recovery phase of a disaster can be as challenging as the initial response.

The University Counseling Center and the Trauma Health and Hazards Center compiled a guide to reactions following disaster and offered to assist. To see their recommendations, visit http://communique.uccs.edu/wp-content/uploads/2013/06/UCCS%20HANDOUT.docx

Chancellor Pam Shockley-Zalabak sent an email message to all faculty, staff and students evacuated during the fire and followed it with personal notes to those believed to have suffered substantial property loss. Her personal message offered the university’s full support during the recovery phase.

The Office of Alumni and Friends is interested in learning if any UCCS alumni lost property during the fire. The office will send a UCCS care package. To submit the name of an alum for a care package, contact alumni@uccs.edu

The tone of the chancellor’s support is personal. UCCS faculty and staff who lost homes during Waldo Canyon have offered to provide advice to colleagues in Black Forest who must now go through the scenario of dealing with emotions and details of insurance claims and finances.

“If someone wants to meet for a cup of coffee, I’ll tell them everything I can about recovering,” said Martin Wood, vice chancellor, University Advancement. Wood lost his home during the Waldo Canyon fire and is rebuilding. “It’s hard. But knowing someone else has been through it and is surviving will, I hope, help.”

– To see a compilation of messages sent during the Black Forest Fire, visit www.uccs.edu/blackforestfire

Send your thoughts and suggestions for the Newsletter.
END_OF_DOCUMENT_TOKEN_TO_BE_REPLACED