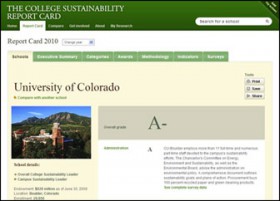 The University of Colorado at Boulder continues to grow its green reputation, with recent accolades coming from the Sustainable Endowments Institute, a special project of Rockefeller Philanthropy Advisors.

CU-Boulder is again ranked one of the top campuses in the nation for sustainability, earning an "A-" grade, the highest given on the institute's College Sustainability Report Card 2010. It also was named an "Overall College Sustainability Leader" for the second year in a row. The campus is the only one in Colorado represented among the top 26 that made the leader category.

The annual report card is considered one of the nation's most credible because it is the only independent sustainability evaluation of campus operations and endowment investments. The project also has the highest response rate of any college sustainability ranking or rating, according to the Sustainable Endowments Institute.

"Coming on the heels of our ranking by Sierra magazine as the No. 1 green university in the nation, this ranking makes a strong case for CU-Boulder's national leadership in sustainability," said CU-Boulder Chancellor Philip P. DiStefano. "When a university combines faculty, staff, student and administrative commitments to the environment, as we at CU-Boulder have for nearly six decades, the results are unprecedented."

The rating was based on an independent review by the Sustainable Endowments Institute and responses by CU-Boulder officials to 120 questions assessing sustainability in the categories of administration, climate change and energy, food and recycling, green building, transportation, student involvement, endowment transparency, and shareholder engagement and investment priorities.

CU-Boulder has a long history of groundbreaking environmental efforts starting in 1951 with the offering of an academic major in conservation education. Other milestones include the first collegiate recycling program, the founding of the Environmental Center, student-negotiated prepaid bus passes, student-purchased wind energy credits and the recent rollout of an aggressive three-year conservation campaign under the direction of DiStefano.