It could almost be the original famous photograph—people standing on either side of the street, ogling, leering, whistling, while a single person walks down the sidewalk, head held high. Only instead of an American girl walking down the street, it's an American boy, and instead of Italians from 1951, it's a group of CU Denver students in 2014. 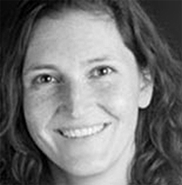 Carol Golemboski, associate professor and head of the College of Arts and Media's photography program

Carol Golemboski, associate professor and head of the College of Arts & Media's Photography program, chose the image, photographer Ruth Orkin's iconic "American Girl in Italy," as the subject for her photography class's replica. This was the fourth year that Golemboski and her husband, fellow instructor Bill Adams, took a group of 14 students to Florence, Italy, for a study-abroad course on photography, and the third time they have replicated a famous work of art as part of that course.

This replica, however, was by far the most rewarding. The re-creation is so similar to the original that it has been a hit with everyone who has seen it—students, parents, staff—even the original American girl.

"I had to re-read it several times to believe it," Golemboski says, thinking about the email that first informed her that Ninalee Craig, the now 86-year-old subject of the original photo, had seen and liked their reproduction. It's not every day that a photography icon compliments a school project.​

The course, Photography in Florence, is designed to be a journey to the past. The students spend half the time in Florence learning about 19th century photographic processes, using "old-school," large-format cameras, shooting on film, and developing their own photos. Then, they spend the other half relating art history, which surrounds them in Florence, to photography, focusing on the trend in contemporary photography of re-inventing classic works of art. At the end of the course, Golemboski chooses a classic photograph or piece of art, and the class recreates it using the classic tools they studied.

It's a final project that Golemboski has replicated each study-abroad trip because it allows students to physically participate in the ideas from their lectures. But she never imagined that her effort to merge contemporary art with art from the past would literally bring the past into conversation with her class.

Part of the recreation process is looking at the underlying values or cultural issues suggested by the original work of art and re-examining them in the context of contemporary culture. Golemboski always tries to make the photo as relevant to contemporary issues as possible (the year "The Da Vinci Code" movie came out, her class did "The Last Supper"), and she always encourages her students to recreate the photograph in a way that suggests new meanings through their contemporary interpretation. This time, the group did that by reversing the genders of Orkin's signature photo.

"Everyone said it had to be me," says Tyler Dickey, the student replacing the American girl in their recreation. "I guess I just have a shining personality."

The original American girl, easily attracting the attention of the entire street, appears to have had a shining personality, too. The original photo raises questions about what Ninalee Craig is thinking as she walks through what appears to be a gauntlet of catcalls. Craig has given interviews in recent years declaring that the photo was not a painful moment of degradation; the dynamic between the genders is central to the photo.

"No matter what happened on that day, people bring all kinds of different meanings to the photo when they view it," Golemboski says. "We wanted to reverse the genders, to put women in the position of power to subvert the traditional idea of male privilege that this photo seems to suggest."

It is partly the gender reversal that makes the replica so interesting, and partly how exact it is.

Golemboski says she was blown away by her students' ability to copy every aspect of the photo. Because the photo is also a group shot of everyone on the trip, including Golemboski's children, everyone found a figure in the original image to imitate. They got everything right—some with their hands in their pockets, others leaning against the wall, a pair on a bike borrowed from a staff member at Santa Reparata, their host school in Florence.

The students gave the photo their all because it was 100 percent their project. They chose their parts, scouted a location that would look similar to the original (and now too crowded for photography), Piazza della Repubblica, set up the large-format camera, and developed the film. It was even a former CU Denver photography student who happened to be in Florence at the time of the trip who ducked under the black cloth of the camera and snapped the photo for the class.

Despite the rain that threatened to ruin the photo, the interested passers-by constantly interrupting the shoot, the photo turned out perfectly. So perfectly that Golemboski wanted to share it.

A Blast From the Past

Back in Denver, Golemboski decided to make a "blurb book," a photo album from their trip, as a keepsake for her hard-working students. Though the trip produced many outstanding pieces of art, the "American Girl" replica was the clear star. Because half their photo's magic is derived from its proximity to the original, Golemboski contacted original photographer Ruth Orkin's daughter, Mary Engle, who manages her deceased mother's archives. Golemboski sent Engle a copy of their replica and asked for permission to reprint the original photo alongside it in their book.

For weeks, she heard nothing. Then, finally, a message:

Yes, Engle said, you can reprint the photo. She had shown the replica to Ninalee Craig, the original American girl—Ninalee loved it, and Engle thought it was pretty good, too.

"The first thing I wanted to do was tell my students," Golemboski says. "I wanted them to know just how successful their art was."

"I was ecstatic!" Joe Addison, the student who arranged all his peers for the shot, says. "Taking the picture was hard work. It's no easy task to photograph a group of photographers. To hear that Ms. Craig liked what we did, it made me feel like we hadn't just been tourists taking a picture, but real photographers making art."

Later, Golemboski was contacted by one of Ninalee's friends, Jack Arno, who wanted to barter—two blurb books in exchange for a signed lithograph of "American Girl" and a catalog of the making of the original photo. Golemboski accepted and, as a surprise, also sent Ninalee a large print of their recreation signed by all the students. Now, Golemboski has a catalog of behind-the-scenes photos from the original shoot to keep with her blurb book with outtakes of her students dancing in the rain.

"It was just one of those teaching moments where everything comes together in such a beautiful way," Golemboski says. "There's such a wonderful validation in these artists responding to our humble creation so positively. I think it's safe to say it's a lesson my students will never forget."

Tagged with:
College of Arts and Media, students

Send your thoughts and suggestions for the Newsletter.
END_OF_DOCUMENT_TOKEN_TO_BE_REPLACED