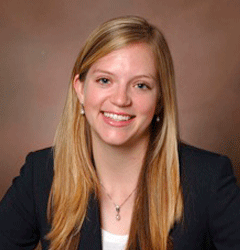 Carmen Vandal, M.D., doesn’t have time to organize clothing drives, deliver strollers to new mothers and make house calls to struggling refugees in Aurora. But she does these things anyway.

A 2014 graduate of the CU School of Medicine and ’08 CU Denver undergraduate alumna, Vandal puts in a lot of overtime hours for her family medicine residency at Swedish Medical Center in Englewood. She comes home from the night shift, crashes for a while and then gets up early to get in some medical reading before heading back to the hospital. Somewhere in there, she makes the time to help the local refugees she met through an elective course in her fourth year of med school.

Her willingness to give back is just one of the qualities that made Vandal deserving of the President’s Medical Scholarship—a reward for her hard work and a ticket to her dream of becoming a doctor.

Paving her own path

In 1973, Chile was a communist nation, with political instability and a 500 percent inflation rate. One 23-year-old Chilean man left his native country and came to the United States to find a more stable future. The man was Vandal’s father, who ended up working as a mechanic and, later, as a warehouse manager to support Carmen and her four siblings in the U.S.

As she grew up in Denver, Vandal’s parents—both Chilean immigrants—were able to provide for the family, but there wasn’t extra money for nonessential items, she says.

At 14, she worked as a secretary for an insurance company, employing her Spanish-language fluency to serve the company’s multicultural customer base. That was the first of many jobs—in everything from day care to retail to the restaurant business—Vandal held throughout high school and college. At times, she held down two jobs, while going to school and bringing home A’s.

Vandal knew from a young age that she wanted to be a doctor, but as a first-generation college student, she struggled at first to find her way.

At CU Denver, Vandal not only received much-needed scholarship money but also was selected for Student Support Services, a program that helps first-generation and low-income students find the resources and support they need to graduate.

“It opened up a whole set of doors,” says Vandal, who later became a peer mentor through the program. “I was able to learn about how to get through college and also help others in my situation, which was extremely fulfilling.”

In 2008, she received her bachelor’s degree from CU Denver, became the first college graduate in her family and found herself one step closer to her dream of becoming a doctor.

Making her mark in med school

Vandal’s financial struggles didn’t end in med school. Because of the intensity of the program, she couldn’t hold a part-time job to pay for living expenses as she’d done throughout her undergraduate years.

“I knew that I was going to need all the financial help I could get,” she says.

Fortunately, Vandal was one of 20 CU medical students selected that year to receive the President’s Medical Scholarship, a four-year award that ranges from $15,000 to $30,000 per student per year.

“I was ecstatic. I was super happy. I couldn’t believe it,” she says. “My whole life I’ve worked hard, not necessarily wanting recognition, but the recognition further motivates, not only me, but other people in my situation to look for opportunities and scholarships.”

Throughout medical school, Vandal’s “give back” mindset shone brightly. She served as class president all four years. She co-founded C-STaHR (Community-Students Together Against Healthcare Racism), an organization that works to end patient discrimination and improve health care. And, with a nomination from 20 of her classmates, she became a member of the Gold Humanism Honor Society, which recognizes medical students for integrity, excellence, compassion, altruism, respect and empathy.
Giving back and giving thanks

In her career as a physician, Carmen Vandal wants to continue to help underserved populations using her medical training, language skills and cultural knowledge. She wants to make sure that other first-generation and low-income students know that they can reach their dreams, too. And she wants to express her gratitude for the President’s Medical Scholarship:

“Thank you for giving me the opportunity to continue through with my passion. I hope you can continue to offer the same to others in my similar situation.”