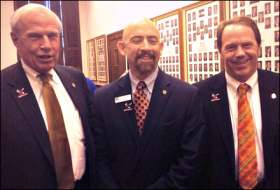 Benson joined Lt. Gov. Joe Garcia and Colorado Mesa University President Tim Foster as the first to speak on the bill at a hearing of the Senate Education Committee.

“We are doing a lot to help ourselves, but the state funding remains critical to us,” Benson told the committee, which he also thanked for supporting the bill.

The increase began as a request of Gov. John Hickenlooper in his proposed budget, then was made into a separate bill by the Legislature. Of the $100 million increase, $60 million would go toward institutions’ operating costs; the remaining $40 million would be earmarked for student financial aid. CU’s share of the $60 million in operating costs would be $16.5 million, or an 11 percent increase over last year.

“It will make higher education more accessible, which is good for the economy,” Garcia said.

Senate Bill 1, aka the College Affordability Act, requires an agreement by higher education institutions not to raise tuition any more than 6 percent next year.

Benson said CU’s current funding level remains $60 million below the past peak for state funding; he called the proposed increase a helpful step in the right direction, and thanked the state for “stepping up.”

Several students, including one each from CU-Boulder and UCCS, also voiced their support of the bill to the committee; no formal action was taken Wednesday.

CU’s Government Relations team will continue to monitor the details as Senate Bill 1 moves through the Legislature.