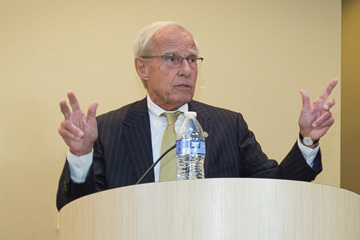 University of Colorado President Bruce D. Benson on Tuesday announced a change in the leadership structure that will allow greater focus on issues, opportunities and challenges facing CU Denver and the CU Anschutz Medical Campus.

Each campus will have its own chancellor, replacing the current model in which one chancellor is responsible for both.

The campuses will remain administratively consolidated, sharing services such as budget and finance, IT, human resources and communication. Benson said the institution will continue to be a single academic entity with one provost (chief academic officer), to whom all deans on both campuses will report on academic matters.

“It’s clear that the two campuses have unique complexities and challenges that demand complete focus from leadership,” Benson said. “While we will retain the academic and administrative benefits of our consolidated administrative structure, we also will be able to give each campus the attention it deserves and to build on the great progress they have made.” 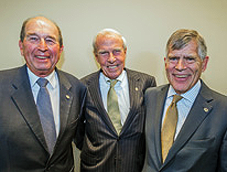 Benson said a national search will begin this fall for a permanent chancellor of CU Denver, with the expectation of having a new leader in place by summer. In the interim, CU Denver Chancellor Emeritus Jerry Wartgow will return to lead the campus.

“We will take advantage of his experience and insight to place a particular emphasis on expanding access and success for students of diverse backgrounds, the development of CU South Denver and the expansion of our online efforts,” Benson wrote in a memo to the university community. “Once the national search is completed, a permanent chancellor focused on CU Denver will provide the consistent leadership and concentration it needs to progress to the next level among urban universities. Per Regent Policy, faculty, staff and students will be represented on the search committee.”

“Don and Jerry have the passion, relationships with key constituents, experience and expertise to build on the considerable momentum we have at each campus,” Benson said. “I also expect that the new model will allow us to attract a great pool of candidates to lead CU Denver.”

Lilly Marks, who is transitioning to retirement, will continue her dual role of executive vice chancellor of the Anschutz Medical Campus and vice president for health affairs until Jan. 1. After that, she will remain as vice president for health affairs with a focus on broad issues facing CU in the changing health care environment. She will work closely with Chancellor Elliman as well as the new leadership of University of Colorado Health and the new dean of the CU School of Medicine, who is expected to be hired in the near future. She will continue to serve on the University of Colorado Health Board of Directors.

The CU Board of Regents and the Higher Learning Commission, the university’s national accrediting body, support the changes. CU’s other two campuses, in Boulder and Colorado Springs, each have their own chancellor.

On Tuesday, the day of the announcement, Benson hosted two on-campus forums and meetings to answer questions about the transition.

“This new structure will allow us to provide focused leadership, build on the considerable strengths of both campuses and better address their unique needs and challenges. Each has made tremendous strides in recent years, and it is imperative that we continue that momentum,” Benson wrote in his memo. “Our goal is to make the University of Colorado one of the top universities in the world, and the work of CU Denver and CU Anschutz are key contributors to that effort. Thank you for all you do toward that end.”

Elliman joined CU Denver l Anschutz Medical Campus as interim chancellor in February 2012, when Wartgow announced his retirement. The “interim” was removed a year later when the Board of Regents voted to waive the requirement for a search for a new full-time chancellor. Elliman previously held high-profile positions as the state’s chief operating officer, director of the Office of Economic Development and executive director of the Charles C. Gates Center for Regenerative Medicine and Stem Cell Biology at the CU Anschutz Medical Campus.

Wartgow was named interim chancellor of CU Denver l Anschutz Medical Campus in May 2010. A veteran of education in Colorado and elsewhere, Wartgow had served as superintendent of Denver Public Schools (2001-05), president of the Colorado Community Colleges System (1986-98), deputy executive director and acting executive director of the Colorado Commission on Higher Education (1973-78).

May 2010 also is when Benson named Marks vice president for health affairs and executive vice chancellor at the CU Anschutz Medical Campus. Previously, she was senior associate dean for finance and administration of the CU School of Medicine and executive director of University Physicians Inc.