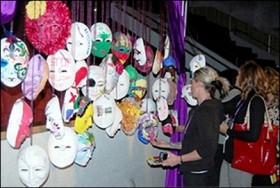 A free multimedia event featuring dramatic and provocative stories of abuse and hope was presented at the Wells Fargo Theater in Denver on Oct. 20. The event was in honor of 10 years of work by the Center on Domestic Violenceaffiliated with theUniversity of Colorado Denver's School of Public Affairs.

Behind the Mask: Bringing Domestic Violence Center Stage represented the victims of domestic violence living behind a mask who hide their abuse from friends and family out of shame and fear. The evening highlight was a theatrical performance demonstrating the emotional and physical turmoil of domestic violence and the role of the Center on Domestic Violence as a vehicle for change. A silent auction included a special selection of hand-painted masks (on display and available for purchase) created by survivors, advocates and allies of all ages.

The evening ushered in the center's second decade of programs, graduate achievements and community partnerships committed to ending violence against women. The event, taking place during Domestic Violence Awareness Month, drew nearly 400 community leaders, students, alumni, funders, policymakers and advocates from across the state and the nation. More than $50,000 was raised in conjunction with the event.

The Seedworks Fund, founded by Sue Hagedorn, associate professor emerita from the College of Nursing, generously matched $750,000. Hagedorn stated that applied research makes a difference at the center, and research combined with education and practice are the keys to changing lives in the community and the nation.

Bridget Orton, wife of Denver Broncos quarterback Kyle Orton, and Terrance Carroll, speaker of the Colorado House of Representatives, co-chaired the event. Bridget Orton is a trained social worker and former court appointed special advocate (CASA). Carroll represented House District 7 in the Legislature and served as Speaker of the Colorado House of Representatives from 2003 through this year. He is an ordained minister and currently an attorney with Greenberg Traurig, LLP. Carroll emceed the event.

Barbara Paradiso, director of the center and featured speaker, discussed the three critical areas of focus at the Center:

Established in 2000, the center's mission is to end domestic violence by fostering institutional and social change through leadership development, education, research and community collaboration.

Send your thoughts and suggestions for the Newsletter.
END_OF_DOCUMENT_TOKEN_TO_BE_REPLACED